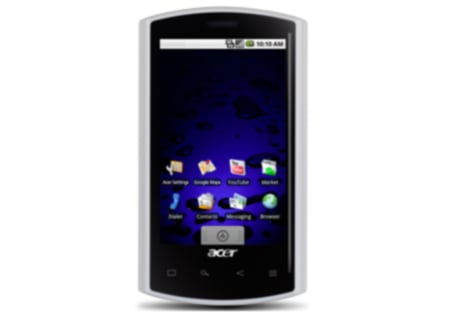 Google’s Android OS has apparently managed to capture the hearts of almost every other gadget manufacturer. Acer is out with their Liquid A1 smartphone that boasts of running the Android 1.6 OS and housing a 768 MHz Qualcomm Snapdragon processor.

The phone displays a 3.1 inch WVGA capacitive touchscreen and an integrated 5MP AF camera with geotagging courtesy of its embedded GPS system. It lends support to quad band GSM and 3G with high-speed HSUPA/HSDPA for internet surfing. Users are offered 512MB RAM and 256MB ROM as also microSD accommodation of up to 32GB. Its Bluetooth and Wi-Fi capability allows for syncing of desktops and laptops with the handset.

Owners can avail of wireless data transfers with the device’s Wi-Fi 802.11b/g and Bluetooth 2/1 with EDR as well as A2DP meant for wireless stereo earphones. It also has a 3.5mm jack for headphone connectivity. Spinlets are applications that enable video and music streaming that may be shared as e-mail attachments. Additionally, owners can also enjoy integration with sites such as Facebook, Twitter, YouTube and Picassa.