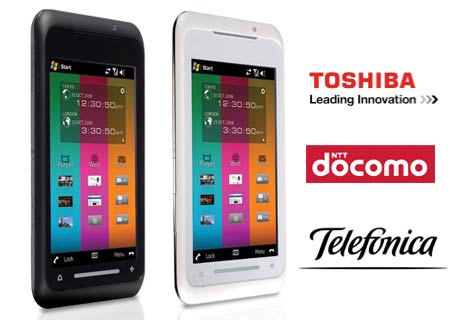 As part of the companies’ many joint ventures, NTT Docomo and Telefonica have introduced a Windows Mobile phone created by Toshiba. This latest product will be sold in the companies’ respective markets, namely in Japan and Spain under different names. The new handset from Toshiba features a full touch panel and sports a chic design. Docomo is slated to release the phone in Japan dubbed the Docomo PRO series T-01A. Telefonica will introduce the same handset in Spain christened as the TG01.

“Docomo looks forward to working with global operators such as Telefonica to jointly develop mobile services and applications for mutually enhanced global competitiveness. At the same time, we would be pleased if such efforts have the added effect of supporting Japanese mobile phone manufacturers in their attempts to expand handset sales overseas,” announced Docomo Senior Vice President and Product Department Managing Director Kiyohito Nagata.

Luis Ezcurra, Manager of Handsets and Multimedia of Telefonica Spain explained, “Operating system platforms are becoming more and more important to drive the extraordinary growth of mobile internet business. Docomo and Telefonica are leading operators in their respective markets and this is a great opportunity to provide their customers with best-in-class products and solutions.”

Docomo and Telefonica are thinking of embarking on more ventures in order to satisfy customers needs and heighten corporative competitiveness. One of their future undertakings is a combined study of applications and services for open OS phones. The handset will be released in their respective markets between June and July of this year. The price of the mobile phone is however not disclosed.