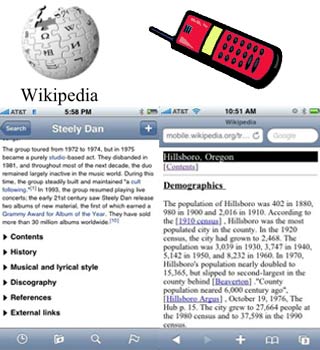 One of the most popular destinations on the internet Wikipedia has finally come up with a mobile version of its site. The news will certainly bring a smile to the millions hooked on to the site for updates and global information.

Though Wikipedia pages are available on mobile phones, the announcement officially confirms a dedicated mobile interface. With the highly functional mobile version of Wikipedia, users can now seek information by simply accessing the Wikipedia mobile site.

The site has been ideally designed to suit mobile user needs. With a 14 language support, there’s no usual Wikipedia start page. Instead it has been replaced by a search page where users can query entries. Also the site involves no graphics except the Wikipedia logo which makes sure that the site is not very heavy. Loading of data is quick and the site appears to be optimized for even the most basic of phones that have a WAP browser.

Another feature of the Wikipedia mobile site that enables faster browsing is the break up of article content. The attribute splits articles into separate chunks and puts them onto different pages. The site also boasts of a feature called ‘Spoken Wikipedia’. Though not functional yet, we assume it should give some practical use of the nearly 800 spoken articles on the site.