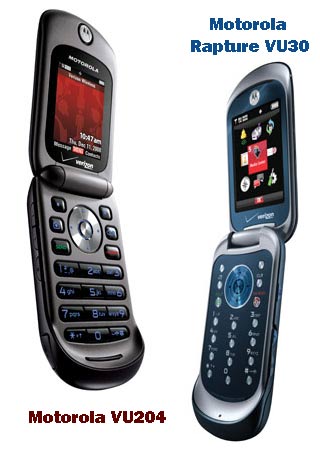 Verizon Wireless has added two new Motorola handsets to its portfolio of the devices it provides. Verizon will be offering Motorola Rapture VU30 and Motorola VU204.

The headsets belong to the mid-range segment. Motorola Rapture VU30 is a clamshell phone which will feature Verizon’s V CAST Music with Rhapsody. The phone has a 2 megapixel camera, 1.6 inch touch display screen on the external side. It also comes with support for high-speed Verizon EV-DO network, Bluetooth 2.0 with support for stereo headsets via A2DP, Verizon’s VZ Navigator and 2.5 mm headset jack, compatibility for extendable memory via the microSD card slot. The phone will be made available by October 14 for a price of Rs $130 after rebate of $50 and with a two-year full contract. Other wise the handset is available for price of $300.

Motorola VU204 is another low-cost clamshell and it comes with a VGA camera, USB mass storage and personal organizer. There is also the Bluetooth and support for PC syncing, VZ Navigator, Micro USB with USB 2.0, downloadable games. The phone is available for $29.99 after rebate if $50 and signing of two-year full contract on October 14.

Motopure H15, the Motorola Bluetooth headsets provided by the carrier comes with a dual microphone for noise cancellation and in a flip shape and will be available before the phones are launched, on October 8. The price of the earpiece is set at $100.