TechShout
Home General London to use MMS to get rid of Graffiti and all the... 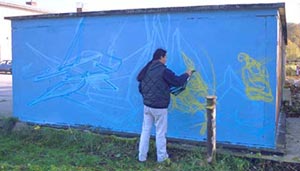 The London, UK, Borough of Lewisham will be now using MMS to clean up the place.

The public is invited to download a Java application to their mobile phones. After which then can take photos of offending graffiti, dumped rubbish, abandoned cars etc and the photo is uploaded to the council who drive down to the place immediately and clear it up.

Though the exact method has yet not been clearly revealed, the most probable procedure would be that the passerby would take the photo via the Java app, which then uploads it to Lewisham Council.

According to Ian Blackburn from the technical solution developers, the cost of the MMS is the same as normal to the sender.

Currently, the location of the photo is identified by the sender texting the street name with the photo. Ian claims that there are plans to automate this in future versions.