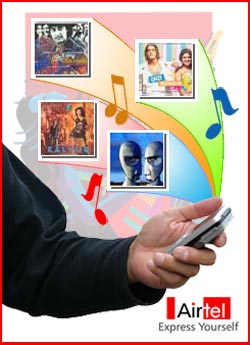 India gets onto the legal online music download bandwagon. Now you can purchase and download Hindi song for just Rs 7 and an international song for Rs 15. India’s music industry has been suffering severely from music piracy for a long time. Pirated copies music CDs are being sold openly everywhere in India and the use of file sharing software’s to download Mp3s have made things even worse.

The introduction of legal download of digital music backed with aggressive pricing is the first major attempt by an organized sector player to create a market for music downloads in the country.

While internationally legal music downloads cost around $0.88-$0.99 or approximately Rs 40 per song, they would be available at less than half the price in India. In effect, India would become one of the lowest-priced markets for legal digital music in the world.

Bharti Group has partnered with an online music portal, which has license agreements with big music labels, such as Sony BMG, Saregama, Venus EMI, Warner, Tips among others, for providing cheap music downloads for its Airtel broadband Internet subscribers.

Dubbed as [email protected], Airtel will price the service at 30% discount for two months as special introduction offer. But after two months the prices will be Rs 10 for a local or regional song and Rs 19.99 for an international song download.

Airtel has partnered with Soundbuzz.com for the online Mp3 download service. Akshay Kumar, chief marketing officer at Airtel Broadband & Telephone Services said, “High quality digital music at such attractive prices has the potential of redefining paradigms in the online digital music segment, and we are happy to have taken the lead in doing so.”

The USP of the offering is the price as also the payment mechanism. “In this deal, consumers can also bill their purchases through their regular Internet usage bills apart from the usual Credit Card.,” said Mandar Thakur, general manager at Soundbuzz India.

Bharti is also planning roll out the service to music downloads for mobile phones. This would, however, require that 3G telecom services be launched in the country.