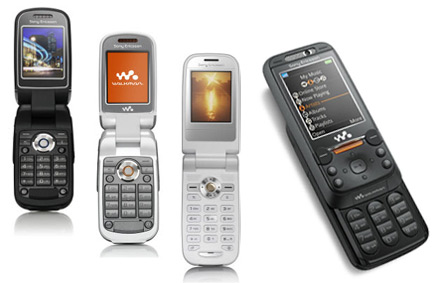 Sony Ericsson, on Thursday announced the launch of five new phones which cater to the sober and the stylish; and from the fitness freaks to the fashionable ones. The holiday mobile phone lineup includes two new Walkman models, two new flip phones, and a phone that is capable of identifying handwritten Chinese characters.

Sony Ericsson has already launched close to two dozen new models in 2006 itself. The joint venture has also begun to take advantage of Sony’s well known brand names in the past year, like the “Walkman” and “Cybershot,” in a play to increase the company’s worldwide market share.

With today’s new Walkman models, the number of Sony Ericsson phones carrying the name now stands at 10. The new W710 aims to please the fitness-minded consumer, with a motion sensor and various applications to monitor workouts. Specially designed headphones would make the phone easier to use while exercising, the company says.

The EDGE-capable phone would be available in Europe, the Middle East, Africa, the Americas and China for between $250 and $380 USD, before carrier subsidy and local taxes.

The Walkman mobile phone line will also gain its first slider model in the W850. It is Sony Ericsson’s first GSM/UMTS slider, the company said. The W850 incorporates enhanced software to make music browsing easier, and can record from FM radio as well as support “over the air” music services. Unlike the other Walkman phones, the W850 will feature 1 GB MS PRO Duo card, which is enough for approximately 1000 tracks in eAAC+. The company also claims that the phone will have to 30 hours music playing time.

The phone would be available in Europe, the Middle East, and Africa for about $480 USD.

Available in Sterling Black or Pearl Copper, the tri-band Z550 is a tribute to the T610, according to Sony Ericsson.

The GPRS-enabled phone will be sold in the European, Middle East, African, and Asian markets for $190 to $250 USD.

A more expensive business-focused model, the Z710, will include a 2 megapixel camera and EDGE data. It also includes e-mail and RSS support, as well as integrated FM radio. It would be made available in Europe, Middle East, Africa, the Americas, and China for between $250 and $380 USD before subsidies.

And last but surely not the least; the M608c is the Chinese version of the M600 e-mail capable phone that the company announced earlier this year. Its USP feature is the capability to identify handwritten Chinese characters, the company said. The M608c additionally includes GPRS support.

In a statement head of Sony Ericsson in CHina, Gunilla Nordstrom said, “China is the single largest market for Sony Ericsson and a strategic base for global business success. M608c is another example that further demonstrates our strong commitment to the China market.”

Sony Ericsson announced that all the models are expected to be made available through the manufacturer’s retail channels by Q3 of 2006.