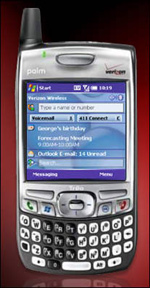 Palm Inc. has launched the Treo 700p SmartPhone, which comprises of hardware and software innovations centered on usability, connectivity, multimedia and compatibility.

It marks the company’s return to the familiar Palm OS operating system, after a brief love affair with the Microsoft Vole which disappointed many of its core users – many of which use a Treo 650 and saw the 700w as a “downgrade” due to its lower screen resolution and “alien” OS.

The Treo 700p features a 1.3-megapixel camera, bluetooth, and software allowing it to act as a modem -via bluetooth or USB- to Windows and Mac PCs. According to Forbes magazine “some analysts say Palm OS-based products, such as the 700p, may appeal more to consumers” and quotes Jack Gold, analyst at J. Gold Associates saying the 700p “is a logical upgrade for Treo 650 users.” Among the new features in the 700p is the long awaited EV-DO (evolution, data optimized) network support, allowing this smartphone to get broadband like data speeds “between 400Kbps and 700Kbps”.

“The release of this Palm OS-based product on the latest high-speed network technology is music to the ears of our dedicated installed base of Palm OS customers and clear validation that we intend to continue to focus on multiple platforms for our solutions,” said Ed Colligan, president and chief executive officer of Palm Inc. “This flagship product, the second new smartphone Palm will introduce this calendar year, offers our world-class usability combined with a smarter phone, wireless email, built-in browser, and rich media capabilities, all at blazing speeds on the EvDO network.”

The company said pricing and availability for the Palm Treo 700p smartphone would be announced later by Sprint and Verizon Wireless.