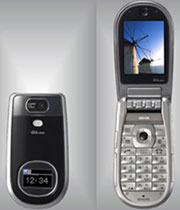 The Kyocera A5515K mobile phone utilizes the Nvidia GoForce 4000 GPU to offer customers a wide-ranging multimedia features. These include a 3.2 MegaPixel camera with auto focus, capable of encoding an image in less than a second and capturing videos at a resolution of 240 x 320 pixels at 15 fps, all displayed on a 2.2-inch QVGA screen

The Nvidia nPower technology allows all of these features at a fraction of the power consumption afforded by conventional software based solutions, giving a better battery life and delivering a more satisfying user experience.

“Nvidia’s handheld strategy is to keep on to setting benchmarks for 3G multimedia features, quality and performance. Giving an enjoyable, high quality multimedia features without compromising performance has been a driving force behind the work we have done with Kyocera for this mobile handset. We are delighted to work with Kyocera on this device delivering a compelling user experience to their customer base around the world,” said Michael Rayfield, general manager for handheld GPUs at Nvidia.