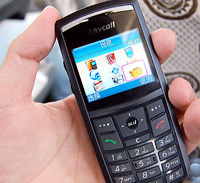 On Monday, Samsung unveiled of what it claims to be the thinnest mobile phone to ever come on the face of earth. The new phone is called the SGH-X820, which has a thickness of merely 6.9mm (.27 inches) can be even used as a bookmark.

Turned sideway, SGH-X820 is slated to be launched on Wednesday at Sviaz ExpoComm 2006, a communication technologies trade show held in Moscow every year.

However size does not always matter…even with this miniscule size the SGH-X820 incorporates a number of features. The phone also serves as an MP3 player with a full 80 MB of onboard storage for tunes.

Additionally, it has Bluetooth capabilities for connecting wirelessly to other devices and a 2 megapixel camera for taking pictures while out and about.

Apart from theses features, the phone has a video-out port that can be used to show pictures on TV sets or computer monitors.

“Samsung is responding to Motorola’s new ‘thin’ trend with a few different products,” said Carolina Milanesi, an analyst at Gartner. According to her, the new phones might eventually mean that people will be able to let go off their MP3 players.

The SGH-X820 is scheduled to be released this month in Europe and Russia and next month in China, however there is no news as to when it would be released in the U.S. The price will be revealed once it arrives.