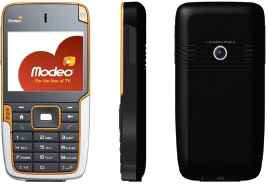 Modeo had recently announced their new HTC smartphone, which showcased Mobile TV, music, and quad-band GSM. This is the first DVB-H incorporated device and has much to offer.

Modeo is looking to officially launch this network and its commercial-grade multicast mobile broadcast center during 2006 in select major U.S. markets. Modeo at present is working on deployment of the network to the top 30 U.S. markets, which is expected to be launched in 2007.

“The Modeo integrated DVB-H smartphone takes mobile TV to a new level,” said Mark Baker, HTC Director of Americas Business Development. “While some multi-function devices are forced to make compromises to deliver a broader range of features, the use of industry-leading specialty assemblies and programs allow the Modeo handset to deliver impressive performance on every front.”