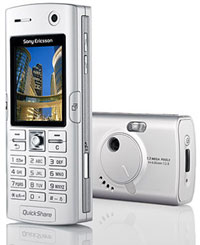 Sony Ericsson launched the K608i 3G mobile phone in India. The K608i is one of the smallest and lightest 3G video mobile phone by Sony.

“We expect a great response for the Sony K608i phone from our consumers in India. Sony Ericsson offers the best amalgamation of technology and style. At the price at which we are offering it, this phone is a value buy with a host of features like dual cameras, video telephony and 3G compatibility.” Said Sudhin Mathur, General Manager, Sony Ericsson India.

Sony K608i phone is fully featured with a suite of business programs that manages personal information and PC-synchronization via USB or Bluetooth, making it the ideal executive work tool, providing business efficiency with high-speed access.

Sony Ericsson K608i mobile phone comes pre-loaded with Vijay Singh Pro Golf 2005 in 3D from Gameloft. Players take on the role of the famous golfer and play on the most spectacular 18-hole golf courses around the world.