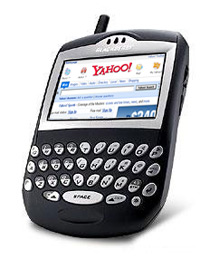 On Wednesday, Research In Motion Inc. revealed its plans of adding Yahoo Inc. web services to the BlackBerry, including email, instant messaging and search.

By the end of 2006, new BlackBerries will incorporate icons that will give users of the mobile device single-click access to Yahoo services from the Blackberry’s main screen, a Yahoo spokesman said. Present BlackBerry users will be able to download the services in a couple of weeks.

The BlackBerry leads the global market for data-centric handheld computers, accounting for 21.4 percent of the nearly 15 million units shipped last year, according to Gartner Inc.

The numbers, however, do not include the 858,000 BlackBerry smartphones shipped last year. Those voice-centric devices are part of an emerging cell-phone market where RIM competes with Palm Inc. Treo and mobile phones running Microsoft Corp.’s Windows Mobile platform.

The BlackBerry’s ows its success to its popularity among business professionals as an email device. The gadget also has been adopted as a standard for many IT departments. To expand its customer base, RIM is targeting the high-end of the smartphone market comprised of people who want data-centric services like email along with voice communications.

The Yahoo deal is an indication of that direction, but is not expected to have a major impact.

“It’s a nice-to-have feature,” David Kerr, analyst for Strategy Analytics said. “Yahoo is what some users might want, but it’s not a homerun feature.”

Within the smartphone market, the BlackBerry’s weakness is not in services, but in the fact that it’s more difficult to use than the other platforms, Kerr said.

“The learning curve for the BlackBerry is hard, compared to the Treo and a Windows Mobile device,” he added.

In the Yahoo deal, BlackBerry users will in the long run be able to access Yahoo Web mail and coordinate sent and deleted items, as well as read and unread message status. Future plans call for importing and synchronizing Yahoo address book and calendar entries.

The upcoming services also include instant messaging and one-click access to Yahoo search.