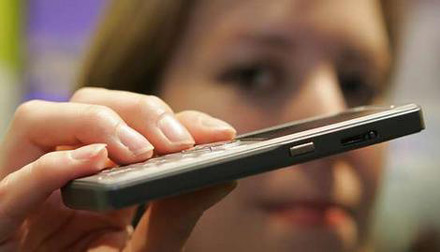 On Wednesday, Samsung announced the slimmest cell phone available in the U.S. market. Samsung SGH T509, the phone will be launched in the markets in May.

This move by Samsung is to put a cutthroat competition with Motorola Inc.’s SLVR range. Motorola SLVR measures 11.5 mm as against the slimmer Samsung SGH T509, which is 9.8 mm thick.

The phone is part of Samsung’s “slim strategy,” a line of phones analysts compared to Motorola’s popular Razr line, first introduced in 2004. Among the 12 new models Samsung plans for the U.S. by the summer, the world’s No. 3 cell phone maker also displayed skinny clamshell or flip models and thin slider phones in which the screen slides forward to unveil the keyboard and a camera on the opposite side.

The announcements were made at the CTIA Wireless 2006 convention in Las Vegas.

“People look at it and say, `I want that,'” Samsung senior vice president Peter Skarzynski said. “We call it slim with substance. Slim product with a lot of features.”

Samsung SGH T509 features a bright 262k-color screen, Bluetooth, EDGE, has an integrated camera and also has the ability to instant message and play MP3 ring tones. It will be made available for T-Mobile.

Analyst Kenneth Hyers with ABI Research said the South Korean company was playing a bit of catch up after global No. 2 Motorola set the handset design trend with its slim Razr mobile phone.

“Many of the mobile handset manufacturers are reacting to Motorola’s design,” he said. “It’s certainly a sleek little device and I think it’s going to find a good niche in the U.S. market,” Hyers said.

Samsung said its P300, known as “the Card,” is the slimmest phone in the world at 8.9 mm, and is available only in Europe.

“Motorola’s success in the category has caused a flurry of new products in this area,” said Gartner Group analyst Hugues de la Vergne. “Ultra-thin devices are going to be a tremendous trend in 2006.”

Samsung also introduced its T709 phone, which it expects will be among the first in the U.S. to offer flawless coverage between cellular networks and Wi-Fi hotspots when it begins selling by the summer.

Samsung also plans to begin selling its t719 phone in Q3 of 2006. It said the phone would be the first flip phone to use Research in Motion Ltd.’s popular BlackBerry e-mail system.