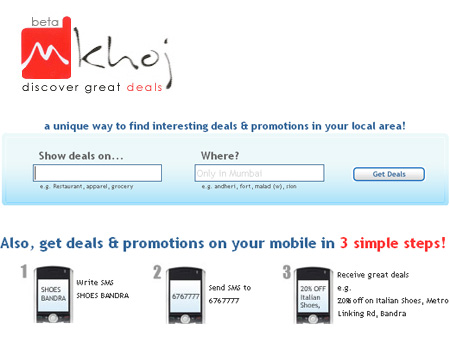 If your ice cream parlor has the best variety of yummy flavours and taste that could be available in the city of Mumbai, but if you just do not have the moolah to advertise and promote the same, thanks to the ever escalating ad costs, then here’s perhaps a solution for you!

India-based mobile advertising company mKhoj has announced an interesting and novel way of advertising, that’s not only innovative but affordable to the pockets too. Now Mumbai residents can access deals from thousands of brands, retailers and merchants across the city. And obviously it’s advantageous to consumers too as they get a variety of options to choose from by just sending a simple text message.

You can get the best ever deals and discount through the mKhoj’s deal platform. Get a multitude of options on a particular product in one’s locality – from shopping malls to branded outlets to a high street shop to the very simple local mom-n-pop store.

All you need to do is type in key search words like the ‘product’ and the ‘location’ and SMS it to mKhoj (at 6767777). And voila get ready to see a collection of the best deals for that product in and around the locality, on your screens.

Naveen Tewari, CEO, mKhoj, said, “mKhoj is the shoppers ultimate friend. Most consumers seek opinions from friends and family before making most purchase decisions. Consumers are now faced with many avenues to shop from – there are many outlets stocking the same product – each offering different value propositions & offers. So how does the consumer then get hold of the best possible deal – that’s where mKhoj comes in. The shoppers will no longer have to spend too much time in searching for the right deals and will be able to save a lot of time by utilizing our services. They can do it directly from their mobile.”

What’s nice is that mKhoj is built on the basis of affordability and is ideally suited for all marketing budgets. Advertising on mKhoj is contextual, as only relevant consumers get the advertising. mKhoj does irate mobile subscribers with unwanted messages.

At present 15,000 retailers are part of mKhoj, there are about 25 organized chains (retail, food etc.) that have teamed up with mKhoj to put forth their deals to the Mumbai consumers. Some prominent names amongst them include, Inorbit, Subhiksha, Cafe Coffee Day, McDonalds, Dominoes, Lakme, Metro Shoes, Fame, The Mobile Store, Tata Sky, Provogue and Kaya Skin Clinic. At any point of time, there are over 3000 active deals on mKhoj many of which change on a daily basis. Merchants can even run hourly deals using the mKhoj platform.

Tewari further continued, “I tell all my advertisers that – you will know exactly who could be interested in your product and you will be able to target them with customized offers via your deals & brand messages. mKhoj ensures minimal wastage of your marketing budget as the brand/retailer is charged only when a consumer sees their advertisement. That’s not possible in any other medium. We launched mKhoj at Inorbit last week and have seen remarkable response – we are observing 30%-35% conversion, which is significantly higher than any other medium. This fundamentally reduces the customer acquisition cost for merchants.”

Initially the mKhoj service will be available only in the city of Mumbai, however the company gradually intends launching it in all other major metros and tier 2 cities and towns. Working towards the same, mKhoj has already has tied up with the leading retails chains and shopping malls in India.