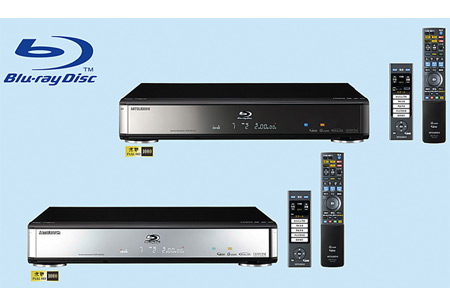 Mitsubishi has rolled out DVR-BZ200 and DVR-BZ100, the company’s two new models from the latest “REAL Blu-ray” Blu-ray Disc recorder series. While DVR-BZ200 comes with a 500GB HDD, the DVR-BZ100 bundles a 250GB HDD. These new products mark Mitsubishi’s entry into the Blu-ray recorder market.

DVR-BZ200 and DVR-BZ100 bundle two tuners for each of the terrestrial digital, BS digital and 110-degree CS digital broadcasts, so they can concurrently record two digital broadcast programs in high definition (HD) mode. In addition, the Blu-ray recorders also include a terrestrial analog tuner. Easy playback, recording and other operations can be achieved that to the incorporation of Mitsubishi’s new “REALINK” capability compatible with its “REAL” LCD TVs in the recorders.

Two remotes are packed with the Blu-ray recorders, wherein the first one is the standard remote controller and the other one is equipped with a touchscreen LCD panel, which displays key buttons on the LCD panel in accordance with the option selected by the user

Mitsubishi “REAL Blu-ray” Blu-ray Disc recorders DVR-BZ200 and DVR-BZ100 will hit Japanese stores on 24th May, 2008. Info about its pricing shall be made known soon. No word on its international release.