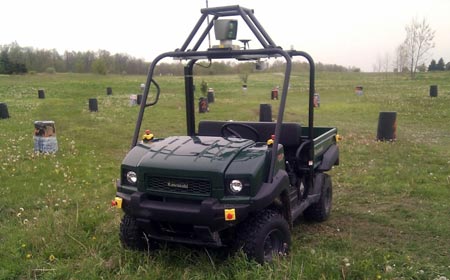 Mechanical engineers at MIT have developed a new safety system for cars, dubbed the ‘intelligent co-pilot,’ to cut down on accidents and injury resulting from human error. The system makes use of an on-board camera and laser rangefinder to map a vehicle’s environment, while a specially-designed algorithm analyzes the data and helps pick out potential hazards.

Sterling Anderson, a PhD student in MIT’s Department of Mechanical Engineering, and Karl Iagnemma, a principal research scientist in MIT’s Robotic Mobility Group, are responsible for the design and implementation of this system, testing of which has been going on since last September.

While most systems focus on taking control out of a driver’s hands, such as self-parking technology, the new semiautonomous driver assistance system is programmed to run in the background, monitoring the driver’s performance. It makes ‘behind-the-scenes’ alterations to ensure the vehicle is always on a safe path. The system has been tested on over 1200 runs which involved only a few collisions.

“The real innovation is enabling the car to share [control] with you,” Anderson explains, commenting on the MIT ‘intelligent co-pilot’ safety system for cars. “If you want to drive, it’ll just … make sure you don’t hit anything.”

Anderson also acknowledges the situations in which this may prove a hindrance. For example, those just learning to drive may get the idea that they have more control than is the case. This could lead to beginners becoming less skilled and more reliant on technological aid. Also, seasoned driver’s who are more set in their ways may feel slightly restricted, or ‘hemmed in’ as he puts it.

The team at MIT is currently working on stripping down the intelligent co-pilot system further, in the hope that it would eventually run using a single cell phone. The idea is to feed the system with information from a phone’s camera, accelerometer and gyro, while making the technology simpler, cheaper and easily accessible.