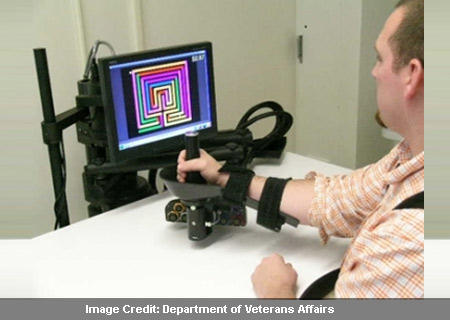 Advanced technology after all is not just limited to superior mobile phones and other innovative portable devices. MIT’s most recent revelation of robotic therapy helping stroke patients only seems to essay this thought further. A new study shares an MIT robotic system dubbed MIT-Manus to have delivered high-intensity interactive physical therapy. This seems to have helped stroke patients get back some use of their arms even if the stroke had cropped up years earlier.

The innovative study closely investigated how effective a class of robotic devices developed at MIT could be. It pointed out that in chronic stroke survivors, robot-assisted therapy seemingly resulted in modest improvements in upper-body motor function and quality of life. This appeared to be true six months post completion of active therapy. The scientists claim these enhancements to be significant when pitted against a group of stroke patients who received traditional treatment.

Furthermore, the robotic therapy is said to include a more intense routine of activities against conventional stroke therapy. While not increasing the total healthcare costs per stroke patient, it could also make intensive therapy available to more people according to the researchers. The development of MIT-Manus is believed to have started over 20 years ago by Hermano Igo Krebs, a principal research scientist in MIT’s Department of Mechanical Engineering.

The core principle of the system is that stroke patients may see maximum positive outcomes when they have to make a conscious effort during physical therapy. The system simply requires the patient to grip a robotic joystick that chaperons the patient’s arm, wrist or hand as he or she tries to make particular movements. This would assist the brain in making new connections which could eventually help the patient re-learn movement of the limb on his or her own.

Patients employing the MIT-Manus are required to grasp a joystick-like handle attached to a computer monitor. The monitor shows tasks that may be identical to those found in simple video games. A typical task will include the subject attempting to move the robot handle toward a moving or stationary target displayed on the computer monitor. Movement of the person in the wrong direction or no movement at all will cause the robotic arm to gently nudge his or her arm in the correct direction.

As part of the study, the patients involved were given therapy around three times a week for approximately 12 weeks. Each hour-long session saw them making hundreds of repetitive motions with their arms. By the end of 12 weeks, tests uncovered a small but statistically significant improvement in quality of life. There also seemed to be a modest improvement in arm function. Testing the subjects again at 36 weeks, both groups namely robot therapy and human-assisted therapy displayed enhancements in arm movement and strength. As against the usual care group, everyday function and quality of life had also improved.

“If you can get a therapist to work at that pace with a patient, certainly the benefits are roughly the same, and we showed this benefit when we designed this intensive comparison group, but it’s not practical,” says Krebs. “Robotics and automation technology are ideal for this kind of highly repetitive tasks. We’re using robotic technology to create a tool for the therapist to afford this kind of high intensity therapy while maintaining the therapist supervisory role, deciding what is right for a particular patient.

Krebs anticipates mass-production of the robotic devices within the next 10 years. This he suggests should also cause their cost to drop, giving them a widespread use such that they could also be available easily in homes. As of now the researcher is working with doctors to plan a study of patients with less severe impairments, who may have had their strokes more recently. These patients, he believes, appear to have the potential to show more improvement with robotic therapy. Besides, along with his collaborators, he is also analyzing if the MIT-Manus could help patients suffering from cerebral palsy, multiple sclerosis and spinal cord injury.

The study published online Friday in The New England Journal of Medicine.