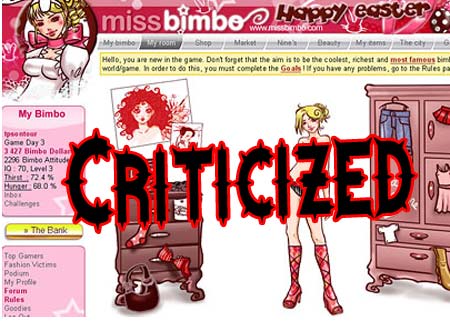 An online PC game called Miss Bimbo was recently launched in the UK. This game encourages girls as young as nine to create virtual “bimbos” by popping diet pills and undergoing breast implants. It’s no wonder then that parents are very enraged in the UK.

Miss Bimbo is the latest online game to anger parents. It is quite horrible that such a game is being marketed to young children as it not only promotes anorexia and other eating disorders.

The aim of the Miss Bimbo online game is to create a perfect Bimbo and the players are egged on to take up spiffy new diets, use plastic surgery and even pop pills so that they can achieve that perfect virtual figure.

They compete against each other to earn cyber dollars and then use this money to create the perfect bimbo. Only then can they be termed as the hottest, coolest, most famous bimbo in the world, claims the game.

The Bimbo is required to be kept at a target weight regardless of whether she needs diet pills or cosmetic surgery for this. Further, in the game, breast implants cost 11,500 bimbo dollars.

The shocking thing is that the Miss Bimbo game has been targeted at the age group of 9-16 year old girls. It has been found out that over 10,000 girls in Australia have joined the over two million pre-pubescent teens worldwide in the last month itself to play this PC Internet game.

Players can also compete to keep their bimbos in the game by taking them to the best nightclubs or dressing them up in clothes and revealing lingerie that can be deemed as unnecessary exposure for young kids.

The Miss Bimbo game has been created by people from France and Britain who said that it was designed as a bit of fun and as an introduction for girls “into the real world.”

But, parent groups and medical authorities in Europe have reacted with nothing but outrage.