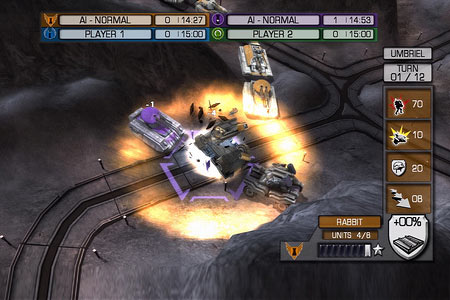 Having created quite a ‘bullet point’ ruckus several months ago, Military Madness has finally been announced. After much anticipation, the official PlayStation blog reveals the Military Madness: Nectaris as the latest title in the popular turn-based strategy franchise. Gamers can get ready to attack the terrain with a well-armored troop.

Offering gamers and their opponent(s) with turns to move their battalions around the battlefield, the game includes a rather distinct way of attack. It comprises of over 20 different types of units that can form up squads. With their own unique advantages and disadvantages, there are more than a half-dozen different terrain types too. These locations can largely modify both a squad’s defensive properties as well as their mobility.

Minus any economic system, players can capture factories to steal squads. They can then put to use those same factories to repair ransacked squads, however if a squad is completely destroyed the player will lose it forever. More about tactics than resource management, Military Madness lets gamers exploit their decisive military actions. Besides, players can also gear up to punish the opponent for making careless ones.

Boasting of loads of content, the game should keep gamers engaged for hours. The single player version packs in all the 32 classic missions from the original TurboGrafx-16 version. A remake of the original game, this single player component sports refreshing graphics that have been fabricated from ground-up AI. The multiplayer mode supports both online and local play that allows up to four gamers to either share a single controller or take on the enemy with separate controllers.

Bundled with 10 original multiplayer maps, the title is particularly designed for 2, 3, or 4 players along with AI-controlled opponents. Featuring scoreboard matches with competitive settings, the game also includes 10 Vehicle Upgrades and 10 Support Abilities for the all-new and highly versatile Commander squad. Additional features of the game are free-for-alls and team games that are accompanied by trophies and a comprehensive manual that should help gamers get around the game effortlessly.

The Military Madness: Nectaris is coming soon to the PSN, though there aren’t any details on the exact release date yet.