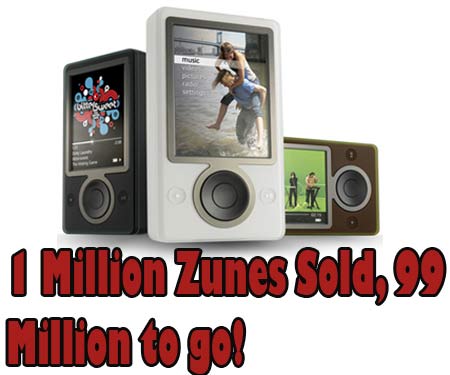 Software giant Microsoft has managed to ship over 1 million Zune digital media players in markets worldwide. These statistics were revealed by none other than the president of Microsoft’s Entertainment and Devices Division, Robbie Bach. In fact, just last week the company had introduced special Halo 3 Edition Zunes.

Apparently, Microsoft originally aimed to touch these numbers in June 2007. However, it seems that the company managed to beat their own estimates a whole month earlier, in spite of failing to carve a dent in rival Apple’s iPod market share.

In comparison, Microsoft’s rival Apple has long managed to sell over 100 million Apple iPods in markets worldwide. In fact, Microsoft’s current market share places them at the fourth spot behind SanDisk and Creative Labs.

“We’re very pleased with the progress. We’ve sold a little over a million Zunes. In the category we’re in, the hard-disk-based category, we’ve got about 10 percent market share. It’s a good start. It’s not an overwhelming start. I’m not going to pretend it’s some gigantic move,”Robbie Bach was quoted as saying.

According to Web site MacNN, Bach said that competing with Apple was “fun” because the company is very skilled and a “worthy” challenger.

That certainly is very noble of Bach to go all out and actually praise their biggest rival, even though Apple has a top place in the media player market.

Apparently, Microsoft is also said to be working on building a new manufacturing plant in China which will produce a second-generation HDD-based Zune media player along with a flash-based Zune.

Bach added, “As for Wi-Fi, we think the idea of these devices being connected where you want them connected is very important. That’s why we snipped the original Zune with Wi-Fi built in. The cool thing about that is, the innovation can all be in the software. Wi-Fi is an important area. We’ll see how that SanDisk project does.”

Now, if Microsoft really wants to keep up with its rival Apple, then all the company has to do is sell another 99 million more Zunes. After all, Apple has already managed to sell 100 million iPods!