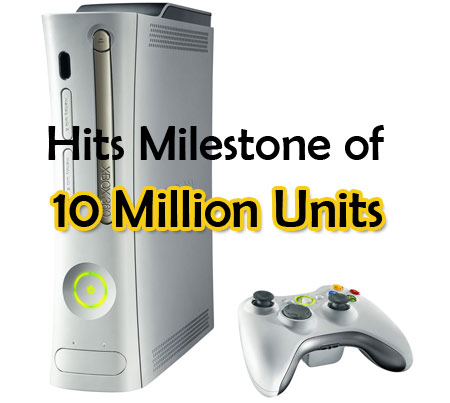 Microsoft’s Xbox 360 console may not be selling well in the other markets but the gaming console is ruling the US gaming market. A sale of 10 million units of the Xbox 360 console proves this.

Microsoft has claimed to sell over 10 million units of the Xbox 360 consoles in the US, going ahead in the next-gen console race between the 360, Nintendo Wii and Sony PlayStation 3. The software giant further stated that the Xbox 360 is the first console to break the 10 million mark in the US.

With this the worldwide sales of the 360 console has gone up over 19 million.

Talking on the occasion, Don Mattrick, senior Vice President of the Interactive Entertainment Business in the Entertainment and Devices Division at Microsoft said, “This year will be the largest in the history of the videogame industry, with Xbox 360 leading the charge in the U.S. and abroad,” said

“History has shown us that the first company to reach ten million in console sales wins the generation battle. We are uniquely positioned to set a new benchmark for the industry,” Mattrick added.

In the announcement, Microsoft said that the launch of the GTA IV game boosted the sale of the Xbox Live to a greater extent. Therefore, the global membership of Xbox LIVE has reached the 12 million mark this month.