Microsoft is reportedly working on a new kind of device that folds out into 2 separate screens and supports digital ink. It’s usually referred to as Andromeda and said to be an extension of the Courier concept the brand came up with many years ago.

The tablet-like Andromeda is apparently set to run on a version of Windows 10 which is built with Windows Core OS and CShell to make optimum use of its foldable abilities. It’s not clear if the product features a single display that bends in half or a hinge to connect the 2 panels together.

No discussion about folding Microsoft devices can be complete without mentioning the Courier. As can be seen in the image above and video below, it basically serves as a digital journal of sorts. A person would be able to jot down notes, locate their friends on a map, click photos and toss them to the other screen to label, and crop photos out of websites. 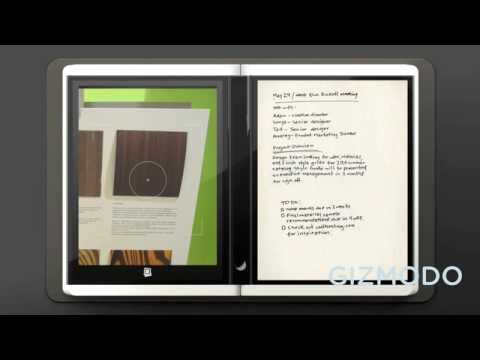 The Andromeda sounds pretty similar to the Courier and may just become part of the Surface lineup, perhaps under the name Surface Journal or Surface Note. Microsoft’s supposedly itching to create a new category-defining mobile device which puts a heavy emphasis on digital pen and inking first.

Of course, Lenovo already has the dual-screen Yoga Book for this, but Microsoft’s version looks to be different. First of all, Windows Central claims that it’ll be pocket-friendly when folded, sort of like a phone. It may even support calling and texting. It’s not meant to replace a smartphone though, so don’t expect it be a Surface Phone in the making.

The Andromeda is set to ship with a notebook app which is linked to OneNote. It’s supposed to mimic the way a real notebook feels, complete with virtual pages that spread across both displays. Sources say the quintessential Start screen and menu will be present, as are apps such as Photos and Edge.

It seems Microsoft’s planning to power its digital pocket book with a Snapdragon processor and make it run on ARM. No definite launch date has been set yet, but sources say the company is looking at a 2018 unveiling. That’s not too far off in the future, but anything could happen in between. We’ll keep you updated if the Andromeda gets the green light.