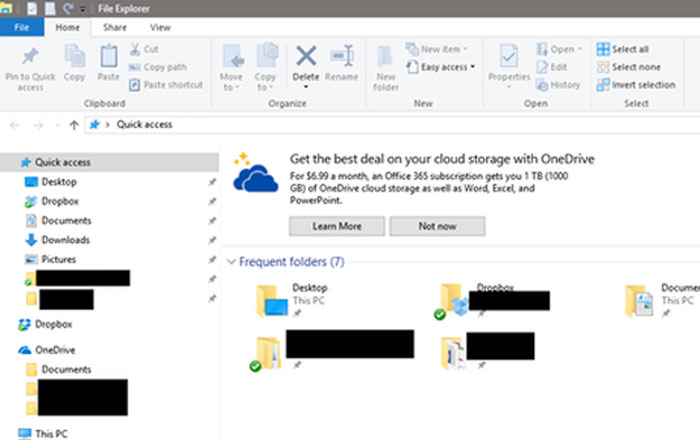 Microsoft’s gotten a notorious reputation for shoving in ads for its own services in Windows 10, something which its customers are none too happy about. The tech behemoth has now taken this strategy to new heights by planting ads right inside File Explorer.

A Windows 10 user recently posted an image of his File Explorer window to Reddit. The screenshot features a large ad for Microsoft’s OneDrive cloud storage facility, asking him to consider paying $6.99 per month to get an Office 365 subscription.

The Redditor claims he already pays for Office 365, making the promotion both intrusive and unnecessary. This isn’t the first time an ad for OneDrive has popped up in Windows 10. A previous advertisement saw Microsoft telling consumers that they could sign into the cloud platform for free.

The newer one is considerably more aggressive. Microsoft is trying to wave it away as a tip, stating that it was designed to help Windows 10 customers by delivering quick and easy information to enhance their experience with regards to storage and cloud file management.

Microsoft was also quick to point out that these tip notifications can be opted out of. People can do so by heading to File Explorer Options, tapping on View, and unchecking ‘Show sync provider notifications.’ Still, many have pointed out that such ads shouldn’t be around in an operating system in the first place.

It can also be seen as anti-competitive since rivals like Dropbox and Google can’t exactly reach inside a person’s OS and plant advertisements there. Microsoft has been following a similar pop-up strategy to promote Edge over Chrome.