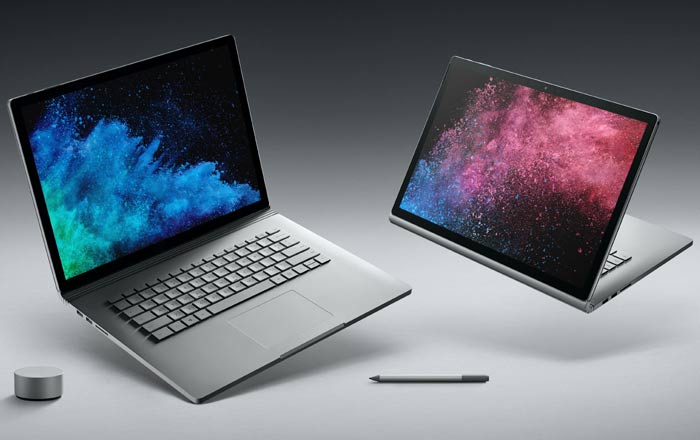 Microsoft’s finally launched a sequel to the Surface Book nearly 2 years after the original was first announced. The new version looks pretty similar to its predecessor, with the company choosing to devote its energy into making the device one of the most powerful laptops in the market.

In fact, Microsoft goes as far as to claim that the Surface Book 2 is capable of supporting mixed reality, machine learning, AI, and high-intensity gaming. It’s pitching the notebook as a device for creatives who want the power of a desktop machine and the portability of a tablet.

The Surface Book 2 can be configured into 4 positions namely Laptop, View, Tablet, and Studio Mode. It even works with the Surface Dial and Surface Pen. There are 2 options available this time round, with one featuring a 13.5-inch 3000 x 2000p display and the other a 15-inch 3240 x 2160p one.

Microsoft’s pretty proud of the notebook’s PixelSense Display, claiming that the 15-inch variant boasts of 7 million pixels, 45% more than the MacBook Pro. Continuing this theme of superiority, the company states that the device can play videos for 17 hours, 70% more than its sworn rival.

Another major difference between the two is presence of two USB-A ports on the Surface Book 2. The 2017 MacBook Pro only carries USB-C ports, requiring a ton of adapters. Microsoft also touts that its product is twice as powerful as Apple’s thanks to the presence of 8th Gen Intel Core processors and NVIDIA GeForce GTX 1050/1060 discrete graphics.

The Surface Book 2 starts at a $1499 price tag for the basic 13.5-inch model and goes up to $3299 for the ultimate 15-inch one. Pre-orders are set to begin on November 9 and deliveries on November 16. You can snap it up via the Microsoft Store, both offline and online.