Microsoft is certainly taking the affordable smartphone market very seriously as it has launched yet another device, the Lumia 430, with a super cheap retail tag of $70. The phone is the lowest the company can go where hardware is concerned, yet it comes it all of the latest features the Windows Phone 8.1 OS has to offer.

We initially expected the Lumia 1330 to make its debut today, but we’re not at all disappointed with the Microsoft Lumia 430. The phone is the cheapest you can get from the company and is quite an attractive pick. Like the Lumia 435, this handset packs an entire gigabyte of RAM and comes with a dual core Snapdragon 200 processor. 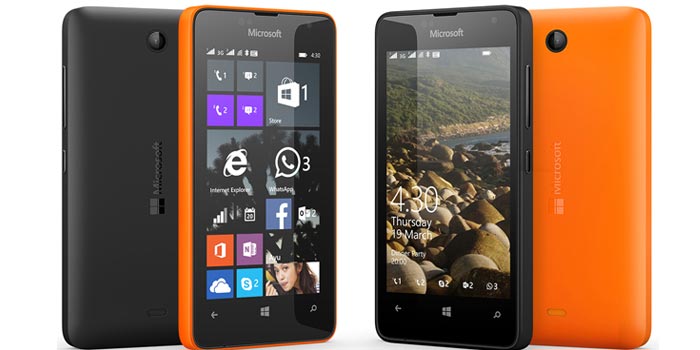 The display here is the same 4-inch WVGA touchscreen and you get a VGA camera for the front, while the rear has a 2MP snapper. For memory, there’s 8GB of internal storage and a microSD card slot supporting up to 128GB. Basically, the Microsoft phone is no different from its Lumia 435 sibling, except for minute changes like a lightly smaller battery and a slimmer as well as lighter form factor.

Also read: It looks like the China-bound Microsoft Lumia 640 XL will be on steroids

As mentioned above, the Lumia 430 runs on Windows Phone 8.1 and it’s confirmed to be bumped to Windows 10 in the future, making it the cheapest way to get your hands on the upcoming OS. The Lumia Denim update comes out of the box and the company has also thrown in dual SIM card slots.

The Microsoft Lumia 430 will be headed to the APAC, IMEA, Russia, Kazakhstan, Ukraine and Belarus from next month.