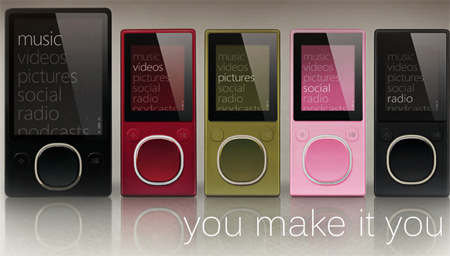 The next-generation of Zune digital audio players are here! As reported yesterday, Microsoft has gone ahead and unveiled two new Zune models. In November 2006, Microsoft had launched the 30GB Zune PMP. Now, more choices are available to those who are not fans of Apple’s iPod.

The new Zune players launched are an 80GB hard-drive Zune and a 4GB and 8GB flash Zune player. The entire line of players feature the new Zune Pad, which is an innovative touch-sensitive button for navigating on the device.

Another feature that the two models share include wireless sync that allows Zune devices to automatically sync over the device owner’s home wireless network when connected to an AC adaptor, in a dock or speaker dock. Let’s take a closer look at each of these players.

The 80GB hard drive Zune is a sleek portable digital media player that only comes in black color. It sports a bright 3.2-inch screen and comes bundled with premium headphones. This top end model carries a price tag of $249.99.

Next up are the ultraportable Zune 4GB and 8GB flash models that can be placed in the same line as Apple’s flash-based iPod nano. These flash Zune PMPs also feature the Zune Pad navigation button with its touch-sensitive surface.

Available in four colors including pink, green, black and glossy red, this model is roughly the size of Apple’s ubiquitous iPod nano. The 4GB model costs $150, while the 8GB model comes for $200.

Listed below are the additional salient features of the new Zune PMPs:

Since all three Zune models come with Wi-Fi, you will be able to sync your music and podcasts wireless over your home Wi-Fi network. However, as of now you still cannot buy music over the air a la iTunes.

Microsoft is also offering a number of accessories that include:

The 80GB hard drive Zune and the 4GB and 8GB flash-based Zune PMPs will be available in November 2007.