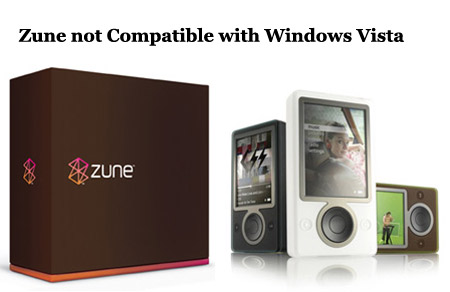 All those who couldn’t wait any longer to get their hands on the Microsoft Zune music player, and purchased it on the day of its launch, November 14 had to face an unexpected error message, while installation. This Zune error has nothing to do with the Zune, but with Microsoft’s much awaited Windows Vista.

When people tried to install the Zune music player on to their computers running with the Windows Vista operating system, they were greeted with a rather surprising zune error message, “This operating system is currently not supported by Zune”.

This zune error issue has been confirmed on Zune’s official Web site, saying that Windows Vista “is not supported at this time” and “to check back for updates.”

According to AppleInsider, Microsoft has been so focused on getting Zune ready in time for the mad holiday season, that it has not gotten around to supporting the player under Windows Vista.

Apparently, Microsoft was not very concerned with including Vista support with the initial release and do not plan to add it until December, due to re-architecture of graphical, audio and video features within the new operating system. Besides, Microsoft’s next-generation operating system Windows Vista is not yet available publicly at retail.

So all those who plan on or have already purchased the Microsoft Zune music player will have to uninstall Windows Vista and switch back to an older operating system to avoid getting zune software errors.