The Microsoft Xbox 360 finally saw the light of the day in India on the 23, September, 2006 with an interesting tagline ‘Game On’.

Since months there has been loads of hype and excitement about the console’s launch in India and now it’s finally there. India is Xbox 360’s 31st outing in the wake of global dominance. 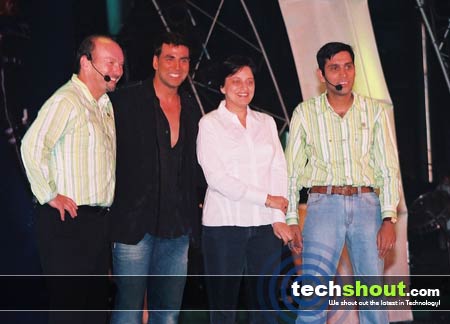 The 360 India launch took place in New Delhi at a mall called Ansal Plaza. The first event on the list was a press conference that kicked off at around 5:30 p.m. It began with speeches from Mohit Anand – Country Manager, Microsoft Entertainment Division and Neelam Dhawan – M.D. Microsoft India and above all by Peter Moore Corporate Vice President Interactive Entertainment Business Microsoft who flew right from the Tokyo Game Show specially for the India launch.

The main event started off with DJ Aqeel taking requests from the crowd that had assembled to witness the event, the requests were handed to him by the bunch of “Booth babes”, “Models” to the common man. The event continued in with crowd interactions by MTV VJ, Cyrus Sahukar. Following this Moore, Anand and Dhawan welcomed everybody to the exquisite launch of Xbox 360 in India. The excited crowd could barely hold on to the ground when their favorite mast mast star Akshay Kumar came on stage in his usual style which is undoubtedly par excellance. Akshay Kumar and cricketer Yuvraj Singh are the brand ambassadors of the console. Later Indi-Pop band Euphoria came on stage and performed their act.

Addressing the event Mohit Anand said, “The console gaming community in the Indian market is expected to grow rapidly in the coming few years. Xbox 360 will definitely act as a catalyst to fuel this growth and expose Indian gamers to next generation gaming experiences,” he said.

It would be available across Microsoft’s 1200 strong retail network across top 7 cities in the country, which includes Delhi, Mumbai, Bangalore, Chennai, Hyderabad, Kolkata and Pune, Anand said. He added that the Xbox 360 would have 25 titles at the launch and henceforth, 7-10 titles would be added to it every month.

Microsoft has already sold about 5 million units of Xbox 360 till June, 2006, and is expecting to sell about 10 million units worldwide by end of the year, Anand said.

A game titled “Yuvraj Singh International” is currently under development for the cricket Centric Nation by Codemasters, known for their authentic rally games and there’s even a “Brain Lara’s Cricket” in line.

In the words of Peter Moore, “India is more than ready for its leap into the next generation of digital experiences.” Undoubtedly, it surely is.