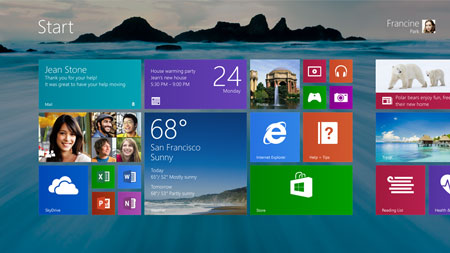 Microsoft’s much talked about Windows 8.1 release date is looming and the company is only too happy to try and make us fall for the next OS version even before it’s launched. After seeing the baffled or intimidated expressions on regular PC users when they logged into Windows 8, we think the tech giant may have to work hard on a convincing pitch for its next attempt at a seamless OS experience on touchscreens and non-touch displays alike.

At any rate, for those who’ve been waiting to see the (last before Ballmer resigns or is made to?) trick Redmond has up its sleeves, here’s a quick look at what’s in store. No more removing tiles from the Start screen by accident, users will have to right click or press and hold on a tile to move it. There’s support for resizing, rearranging or uninstalling multiple apps simultaneously now. And the Lock screen will be able to flaunt a slide show of photos from local or SkyDrive storage.

The upcoming OS version is all set to make accessing files a smoother experience with the choice of direct storage to SkyDrive. This content will be accessible even when users are not online as long as it had enough time to be downloaded if it wasn’t hosted locally. The Search charm which can be pulled out from the right hand side of the interface has been reworked to deliver Bing answers along with local results to queries. The search ‘Hero’ replies are hauled out of installed apps, the internet, SkyDrive or actions that can be executed by users.

When Microsoft finally stopped thinking merely in the direction of non-touch devices, Windows 8 is what came about. But for sales of the software for PC to really take off, some changes were necessary. Well, it gets easier with this iteration that features the Start tip sketched out as the traditional Windows logo. On the desktop, it’s always viewable on the taskbar and when the mouse is hoverered on the bottom left corner of the display otherwise.

As far as we can see, it may still sound like a confused mess to normal PC users. Those who’re eager to jump right into Microsoft Windows 8.1 will have to wait for the preview launch which is scheduled for June 26.