With the release of Office for iPad, Microsoft has sent a strong signal across the tech industry as well as its consumers that making a comprehensive software suite for one of its rival’s products is indeed something it’s committed to. Along with this announcement, the company also made it known that both the Android and iPhone apps of Microsoft Office Mobile are now free for home use.

Microsoft Office for iPad
This version of the world’s most popular productivity software will feature support for Word, Excel and PowerPoint. All these three apps are now available as free downloads, while they even let you view documents on your devices free of cost. However, if you wish to edit these files you will require an Office 365 subscription. 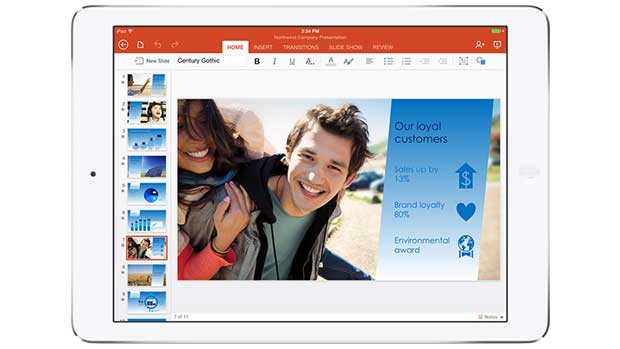 As can be seen in the image, Office for iPad grabs quite a familiar and clean design which is in line with its desktop brethren. Most importantly though, the large screen of the Apple tablet allows for a more efficient way to interact with the suite of apps.

Microsoft Office Mobile
Much to the delight of Android and iPhone device users, Office Mobile has been freed from any subscription requirements. This means you can view as well as edit your documents right through your smartphones, just like on Windows Phone handsets.

This move comes following both Google and Apple having pushed their own free office apps via their respective app stores. While Mountain View has made QuickOffice a default app in the KitKat OS and has also made it available for other versions of Android, Cupertino has release iWork which serves the same purpose of viewing and editing documents.

Downloads
Here’s where you can download the iPad versions of Microsoft Word, Excel and PowerPoint. As for the free versions of Office Mobile, they are live now on the Google Play store and the Apple App Store.