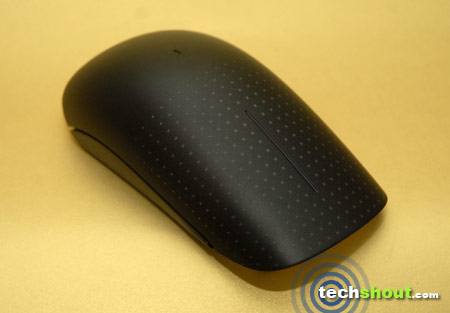 Last month, the Microsoft office in Mumbai seemed quite an unlikely setting, we thought for the unveiling of something as exciting as the Microsoft Touch mouse that’s happily crawling our desks as we review it and slated for release in India this month. Projected as a lifestyle product for a premium audience, Microsoft hopes to catch the ongoing festive fever with this peripheral. Designed specifically to work with Windows 7, the mouse is a direct competitor to the Apple Magic mouse, and intends blending together touch functionality with enhanced mouse gestures. And what really had our attention the first time we laid eyes on this product was its very distinct construct. Impressing us from the word go here’s a lowdown on whether it should be your choice for ‘mousing’ around a Windows 7 PC this season.

The Microsoft Touch mouse was packaged beautifully, making its intentions very clear on the kind of audience its targeting. The product stood upright in the box with the user documentation, batteries and everything else right below. Microsoft says it has adopted a squirrel-like appearance for the mouse which does become quite evident with the dotted top surface in a textured matte black finishing. Despite being all-plastic, the device looks elegant and is almost certainly attention-grabbing. Now don’t get started on ‘Why does a mouse look like a squirrel?’, because the bottom line is that it looks good. The left and right buttons are separated by a close to invisible slit running along the top as physical buttons also sit on the bottom edges. The capacitive touch-sensitive chassis offers enough room for seamless movement and is ergonomically built to fit well in any hand. Turn the mouse over, and its bottom holds the battery compartment (AA batteries) with a receiver slot. There’s also a switch to power on/off the mouse and a LED glowing blue when the mouse is on. 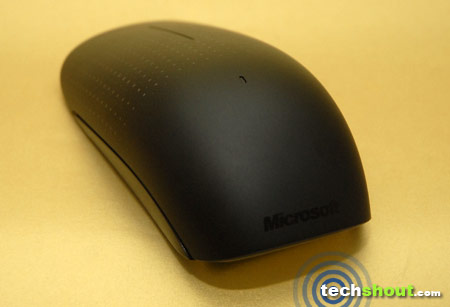 It didn’t take much to get the Microsoft Touch mouse started. Just plug in the dongle to a USB port on your Windows 7 PC and wait until the driver installations are completed. Follow this to be guided for installing the Microsoft IntelliPoint software v8.2 in a jiffy. Once set up, the IntelliPoint tool made rather ‘intelligent points’ at introducing us to the mouse. The device is designed for both right and left-handed users, we’re told and we could select the preferred mode right at the start. There on, a small demo video helped understand the functionality of the mouse better and we’re giving it a thumbs up for being so patient with all the details. The mouse features a BlueTrack sensor which is Microsoft’s own patented technology in the works instead of standard Bluetooth for wireless connectivity. Early on, we realized that the mouse is mighty sensitive and takes almost every rub and touch very seriously, getting to task as soon as you’ve petted it. Besides, the included software is handy at tweaking the manner in which the mouse responds to various gestures.

Yes, it does take time to get accustomed to the sensitiveness or should we say over sensitiveness of the mouse. Unlike the Apple Magic Mouse that had us struggling for one complete day before we knew where we were going, Microsoft’s Touch took to our liking in just about a couple of hours of usage. A single finger we learned is effective in scrolling up, down and sideways while a speedy flick makes hyper scrolling a cinch. The usefulness of the device is enhanced as a thumb swipe made way for easy left to right navigation and vice versa, particularly useful when viewing images or moving back and forth through web pages. The mouse functions well with the two finger swipe too, instantly activating the Windows 7 Aero Snap feature and having the window fit half the screen perfectly. Minimizing and maximizing a window is synced to work with two finger movement in the forward and backward direction respectively. And if you must really ask our favorite gesture, it’s the three finger swipe that has all windows neatly arranged as tiles on the desktop. 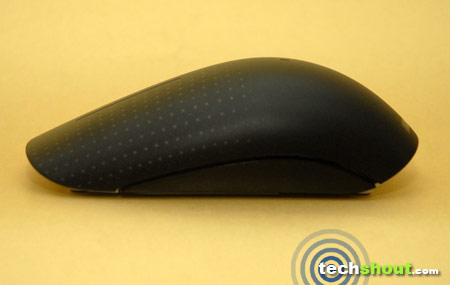 What we found common with all the gestures is that the Microsoft BlueTrack technology holds things together. Besides the hiccups we faced when initially using the mouse, it never ceased to obey commands diligently on every occasion. There was hardly a moment when the rodent wanted to do its own thing, except not really understanding what we intended when we swiped our finger in a slow flick as it enthusiastically reached the end of the page (almost every time). The buttons seated along the sides are also handy for selection of text. If you must hand this elegant device a particular crown – it would without doubt be for its proficiency at charming on any surface. From keeping it on your jeans to a table and even a bean bag, there wasn’t one place that we could point out which made the device feel awkward. The incorporated tracking technology ensures the Touch mouse identifies movements on a plethora of surfaces and mind you really well.

Microsoft puts in that extra effort at keeping functionality and performance at an all time high with the Touch mouse. Whether it’s plain sensitivity (which can really make all the difference when working with a mouse) or the speed of the pointer, routine tasks are handled with accuracy and speed seems to be its forte. Customized for use specifically with Windows 7, the touch capabilities have been optimized for apt usage. 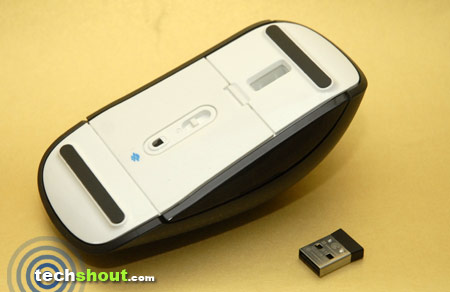 Watch the mouse work through all kinds of surfaces naturally.

Obviously, the slim and ergonomic construct of the device is alluring.

The Microsoft Touch mouse has been crafted for extreme comfort, and sits well in the palm, allowing for convenient usage over long periods.

We do understand that the mouse has been built for use primarily with Windows 7, but does it really have to behave that badly with other platforms?

Even as much as the ability of the mouse to identify correctly a left click from the right is annoying, the slouchy scrolling beats it hands down.

The device doesn’t take to gaming well, not even in the slightest bit.

If you’re among the handful that claims to be smitten by the Apple Magic mouse and have always wanted something along similar lines for your Windows 7 PC, the Microsoft Touch mouse should suit you well. But is it worth the Rs. 3,999 price tag attached to it? It’s really difficult to say – Microsoft is pretty much spot on with touch optimization and overall performance though the faint misinterpretation of gestures may have users in second thoughts. Control and fluidity are almost certainly an advantage with this natural charmer, even if there’s something as important as dependability missing. So it’s clearly something that relies on how much functionality you’re looking at eking out from a mouse. Our rating meter though scales up to a good 8.5 out of 10 for this mouse. And it’s available now, so have you zeroed down on that someone you’re gifting this mouse to?