Consumers in the US and Canada now have the option of buying the Microsoft Surface Pro 2 bundled with an Xbox wireless controller as well as two downloadable games at no added price. This bundle has been released by the company in partnership with the Geek & Sundry culture show, and it costs $899.

That’s the price for the 64GB model which is the only one included in this deal. Aside from an Xbox wireless controller, Microsoft has promised that buyers will be furnished with download codes for War Thunder Mustang and Farming Simulator 2013, both of which feature fairly mediocre offerings. 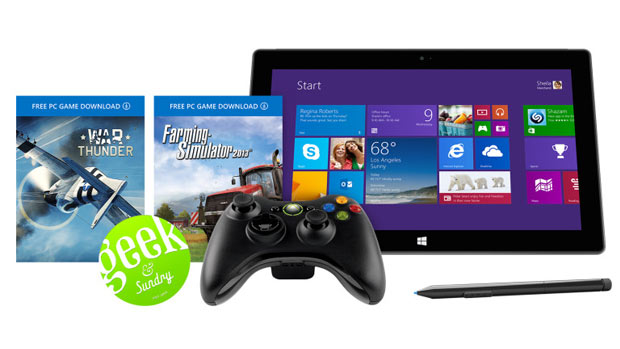 The Microsoft Surface Pro 2 tablet was released in October last year with Windows 8 onboard. It boasts of a 10.6-inch full HD display and two HD cameras on both its prominent surfaces. The device is powered by a dual core 1.9GHz Intel Core i5-4300U processor and Intel HD Graphics 4400. There’s 4GB worth of RAM present on it.

Its maker has fitted the tablet with a variety of connectivity options and sensors as well. It moreover ships with Dolby Digital Plus stereo speakers. The new Surface Pro 2 bundle can be bought now through the Microsoft Store in the US and Canada at $899.

Here’s a look at the device’s specs: