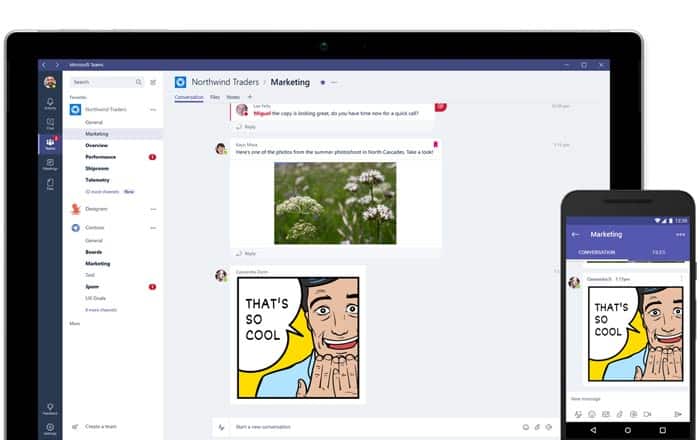 Microsoft has officially unveiled Teams, its maiden venture into the world of chat-based workplace platforms dominated by the likes of Slack and HipChat. The software is now a part of Office 365’s portfolio and currently available in preview in 181 countries in over 18 unique languages.

Microsoft Teams is basically meant to act as a one-stop gathering place for a team to work together in collaboration via text, video, and voice discussions. Threaded team chats are visible to all members by default, though people can choose to opt for private conversations as well. The tool also lets people communicate via custom memes, GIFs, stickers, and emoji.

Teams has been deeply integrated with Skype and Office 365 products such as Word, PowerPoint, OneNote, Delve, Excel, and SharePoint. Microsoft is also offering the services of Graph which works across the entire workspace to dig up information and share it conveniently.

Microsoft is further looking to appeal to enterprise customers by promising a deeply customizable experience for each team. For instance, it provides notification and updates from third-party apps like Twitter and GitHub. The company is also including full support for its Microsoft Bot Framework to add a dash of AI smarts.

Microsoft is hoping to advance this customization agenda by announcing a Microsoft Teams Developer Preview program. The brand currently boasts of integrations with over 150 partners such as Asana and Hootsuite. It’s looking to entice developers with features such as Tabs which allow services to create its own dedicated window within a channel.

Microsoft Teams is set to hit general availability in the first quarter of 2017. It will be open to all Office 365 commercial customers who subscribe to either Business Essentials, Business Premium, or Enterprise E1, E3 and E5.