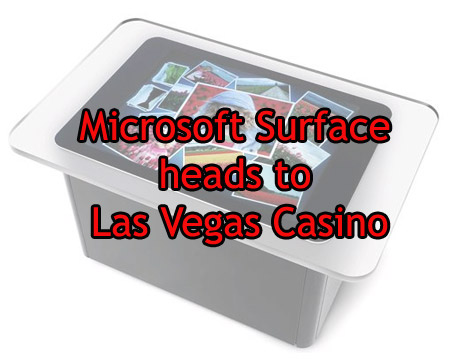 When you think about massive and lavish casino resorts, the one city that comes to our minds first is that of Las Vegas a.k.a. the Sin City. And Microsoft has been truly smart in debuting its Casino touchscreen tables in the city that never sleeps, literally!

Microsoft and Harrah’s Entertainment have rolled out the high-tech interactive bar table that allows visitors to order drinks, watch YouTube videos, play touchscreen games and even flirt with one another. Wow!

Seemingly, Harrah has developed its own software for the machines and has packed in cameras into them, enabling people to send pick-lines, drinks or both to bar-goers they are interested in striking a cord with in real life.

Amongst the several uber-cool and exciting programs, the ones that deserve special mention is firstly Mixologists, where the patrons take on the roll of the bartender by creating and ordering concoctions of whatever cocktails and mixers they click on. Flirt with Flirt, a program where visitors exchange original messages or choose from suggested come-on lines.

The other program that lets users watch YouTube videos, either by searching or choosing from a list is also something that patrons shouldn’t miss out for anything under the sun.

What’s more, patrons can play games on the computers, watch online videos or take a virtual stroll along the famous Las Vegas strip without leaving their seat at the “iBar”.

And the fun doesn’t end there. Several other programs allow users to play video games or get information about restaurants, shows, nightclubs and other Harrah’s attractions.

Of course, the best things in life don’t come cheap! According to a Microsoft spokes, the units sold for a base price of $10,000.

This is the very first time that the Surface has been introduced in the realm of entertainment. In April, AT&T began using the Surface in some of its retail stores.