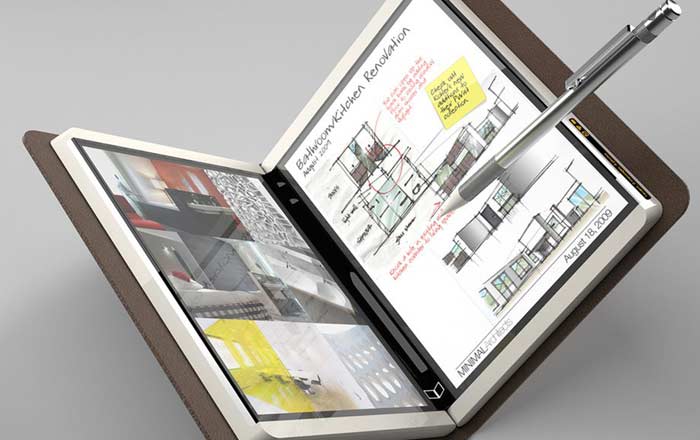 Microsoft’s hardware roadmap for the future has just gotten leaked in a new report detailing 3 new products it’s working on. Two of them belong to the Surface family, while the third is the first of an all-new category of foldable devices.

Thurrott got its hands on a couple of internal documents which outlined Microsoft’s plans for the Surface family. It seems the Surface Pro 6 has the codename Carmel. Details about the tablet are scarce, but it does seem to be in active development.

The Surface Pro 6 doesn’t have a shipping date yet. Microsoft had released the Surface Pro 5 LTE variant back in December 2017, so there’s still some time before a refresh is expected. The company also appears to be working on a low-cost Surface tablet codenamed Libra.

Libra might arrive before the end of the year. A Bloomberg report had previously claimed that it would be priced at $400, sport a 10-inch display with rounded corners, and deliver 9.5 hours of battery life. It’ll probably be powered by an Intel chipset and be the first Surface tablet to rely on a USB-C port for power.

The affordable Surface slate may be sold in 64GB and 128GB models with and without LTE support. An integrated kickstand will likely be present, as well as Windows 10 Pro. At $400, Microsoft might be targeting the education sector that Apple has been trying to capture with a new $329 iPad.

Also See: Microsoft is killing Windows 10 S and turning it into a mode

Last up is Andromeda, said to be Microsoft’s first foldable device. It’s scheduled to come out in 2018. The brand supposedly sees the product as the beginning of an all-new category, with other OEMs following suit. It envisions Andromeda as a pocketable gadget that helps create a personal and versatile computing experience.

Thurrot notes that the leaked documents originated from the time of Executive Vice President Terry Myerson’s leadership. He’s now leaving Microsoft, so these plans might change in case something changes behind-the-scenes.