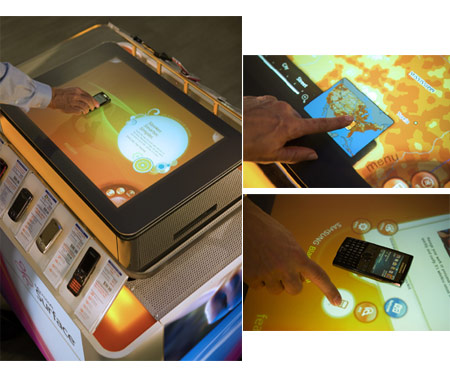 Now the good news is that Microsoft Surface will roll out as a marketing tool in a couple of days on AT&T Inc.’s wireless stores. On April 17, stores in New York City, Atlanta, San Antonio, and San Francisco will be displaying the Surface on shelves.

A total of 22 Surface are programmed to identify 8 of AT&T’s wireless handsets. When a user places his phone/s on the table, data about its features pop up. In addition, shoppers can also zoom around the network carrier’s coverage map and get to know about the calling plans by moving their hands across the screen.

“We are thrilled to bring this groundbreaking new technology to our stores so we can introduce customers to their mobile worlds in a very personal and easy way,” said Ralph de la Vega, president and CEO, AT&T Mobility. “We look forward to working with Microsoft to continue developing new ways for our customers to learn about the ever-growing lineup of mobile devices and applications.”

But AT&T has no intentions of replacing man power with machine power. According to the company, the machines are intended to help salespeople, not replace them

The veil over Surface was first lifted last May, after which the software maker said that the Windows Vista-based machines would first hit T-Mobile store shelves across the US and properties owned by Starwood Hotels & Resorts Worldwide Inc. and Harrah’s Entertainment Inc. Those affiliates planned to have Surface operating by November, however later delayed the release by a couple of months.

According to Mark Bolger, senior director of marketing for Surface, those companies are still working on a software apt for their own brands and locations. Bolger added that all three are in the works of installing Surface this spring.

All the same AT&T stood first in this race, thanks to the creative help rendered by Avenue A/Razorfish, a design studio Microsoft took over when it bought aQuantive last year.

“We saw that announcement and immediately began discussions with Microsoft,” stated Andy Austin, a director of retail customer experience at AT&T. “Obviously I cannot speak to other launch partners, but we are very happy to be their first launch partner.”

AT&T’s units have a brushed-metal base instead of the shiny black finish that the initial models had.