We’ve long been dealing with rumors and leaks regarding the Microsoft Surface 2 tablet, and it seems the bubble will finally burst on September 23, the date on which the company will be holding an event in New York. Lots of speculations are making the rounds at the about the kind of products we’ll be getting to see at this event, but nothing concrete has come to the fore as yet. The current range of Microsoft tablets includes the Surface RT and the Surface Pro which have both been recently blessed with price drops.

CNET has published the invitation which Microsoft has sent over, and confirmed that the company is cooking something for September 23. The site has also received information from an analyst at DisplaySearch which points out that a full HD display will be making its way onto the new Surface RT. Winsupersite on the other hand, had earlier speculated that this slate will come equipped with a Tegra 4 processor and the 8.1 version of Windows RT. It is to be called the Surface 2. 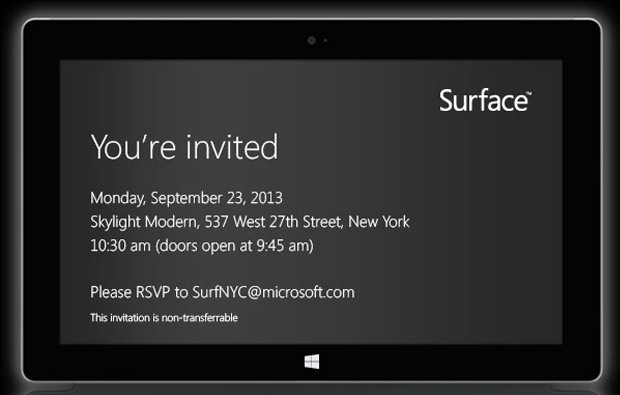 This device will apparently be accompanied by the Microsoft Surface Pro 2 featuring a fourth generation Intel Core i5 processor, a full HD 10.6-inch display and Windows 8.1 Pro. Speculations are rife that a Surface ‘mini’ tablet is also under development. This rumored device apparently kicks in a Qualcomm processor, an 8-inch screen of unknown resolution and Windows RT 8.1. Other details about it are scarce at the moment.

We’ll have more on the Microsoft Surface 2 and the big New York event as soon as new details about them are out.