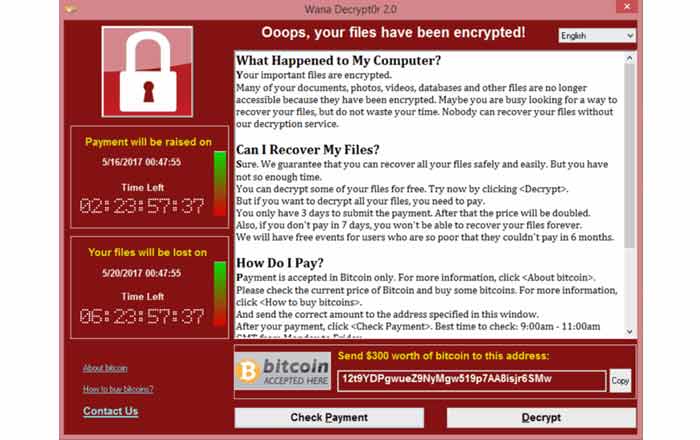 Over 200000 computers located across 150 countries around the world got hit by a ransomware worm dubbed WannaCry over the past few days. In the aftermath of the attack, Microsoft has pointed fingers at the US for its role in the spread of the malware, while security experts warn that a more lethal version of the virus could be unleashed on computers this week.

It appears WannaCry exploits a vulnerability that was stolen from the US’ National Security Agency (NSA) earlier this year. The flaw was made public in April, but Microsoft says that it had already issued a patch to fix the hole in March. It seems many PCs didn’t get updated, leaving them exposed to the malicious ransomware.

Several organizations around the world including the UK’s National Health Service (NHS) were greeted by a message informing them that they had to pay $300 in Bitcoin if they wanted access to their files. WannaCry had encrypted their data and the people behind it were threatening to wipe out everything if the amount wasn’t coughed up within 7 days.

A cybersecurity expert calling himself MalwareTech later slowed down WannaCry by registering a domain name that he uncovered hidden in the ransomware’s code. He’s now warning that version 2.0 of the worm will likely remove this flaw and people are only safe if they patch their computers.

Microsoft is offering the same advice and has taken steps to protect PCs which are still using unsupported systems like Windows XP. Its blog post on the topic slams governments for stockpiling vulnerabilities. It pointed out that these holes routinely get leaked as in the case of CIA hacks showing up on WikiLeaks and the above NSA-related instance.

Microsoft’s now calling for a new requirement that would ask governments to report vulnerabilities to vendors instead of hoarding, selling or exploiting them. Meanwhile, you should make sure your OS is up-to-date. If you get hit by WannaCry, don’t pay the ransom since this will just encourage the attackers. Resetting your PC is your best option, though this will get rid of all your data.