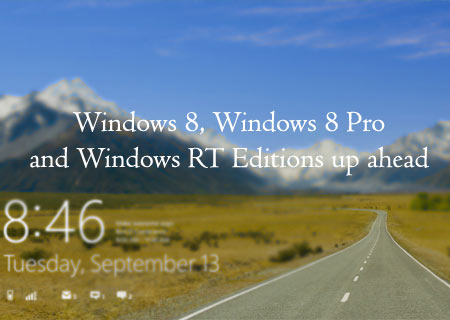 Microsoft has not only announced that the Windows 8 moniker is going to be the official name for x86/64 editions of its upcoming OS, but has also unveiled the different versions it will be available in. For devices running on the ARM architecture, the company plans on rolling out a separate variant called Windows RT.

Users with PCs or tablets that come embedded with processors based on the x86 architecture will basically have 2 choices, namely Windows 8 which is a basic version and Windows 8 Pro. The former edition is said to come bundled with a bunch of enhanced features like an updated Explorer, a new Task Manager, improved support for multiple monitors and much more. And where the professional offering is concerned, it incorporates all the aforesaid attributes along with a wide variety of additional tools for business users and professionals. They include encryption, virtualization, PC management and domain connectivity amongst others.

“Windows 8 has the flexibility you need – whether you’re on an x86/64 or a WOA PC. You can use a touch screen or a keyboard and mouse – and switch anytime. It’s beautiful, fast, and fluid design is perfect for a wide range of hardware. And you’ll love browsing through the Windows Store and downloading all the apps you want. And those apps can work together too so you can share photos, maps, contacts, links and whatever else you want faster and easier,” reads a post made on the official Windows blog.

The latter version of the OS will also bring in support for Windows Media Center, which is expected to launch as an add-on for users running Windows 8 Pro. In addition to these, the Windows on ARM platform has been re-branded to Windows RT. This WOA edition is most likely to ship with touch-optimized variants of the new Word, Excel, PowerPoint, and OneNote applications. Microsoft has yet another variant of its upcoming desktop platform up its sleeves. Dubbed as Windows 8 Enterprise, it’s said to be specifically built for business customers with Software Assurance agreements.

Unlike the Windows 8 and Windows 8 Pro versions, the RT edition will be available pre-loaded on tablets and devices running ARM-based processors. Pricing details for each OS variant are expected to be unveiled in the coming months.