Microsoft Retorts to the Xbox 360 Accusations made by the BBC Show, Watchdog

After being reprimanded by Britain’s consumer affairs show Watchdog for the faulty Xbox 360 consoles, Microsoft has come out strongly against the accusations made on the show. The BBC show had focused on the red ring of death, a condition where three red lights appear around the console’s power button and the Xbox 360 stops working. 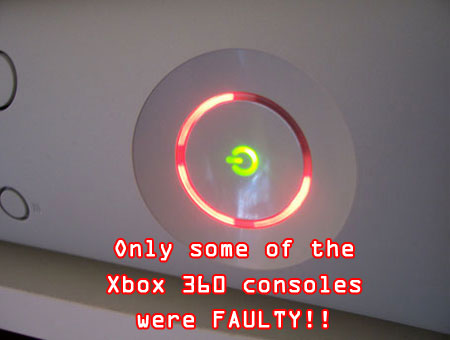 Microsoft said, “Customer satisfaction is our highest priority, and we do everything we can to take care of gamers who may be having problems with their consoles. Anybody having an issue with their Xbox 360 console should call customer service immediately so that we can help. Microsoft voluntarily provides customers with a one-year manufacturer’s warranty in the UK which operates over and above the legally required retailer warranty for all consumer goods.”

Nevertheless, Microsoft did agree there were some ‘isolated’ incidents regarding the faulty Xbox 360 saying, That being said, we have received a few isolated reports of consoles not working as expected. It’s vital to note that there is no systemic issue with Xbox 360 – each incident is only one of its kind and these customer inquiries are being handled on a case-by-case basis.”

Xbox 360 gamers face a lot of problem in UK as they had to pay anything between GBP 80 and GBP 90 (approx. Rs. 7500) to get the defective Xbox 360 consoles repaired regardless of when it was manufactured. US Xbox 360 gamers were lucky as Microsoft had repaired their faulty consoles free of charge. However, no such reports have come from Xbox 360 owners in India.