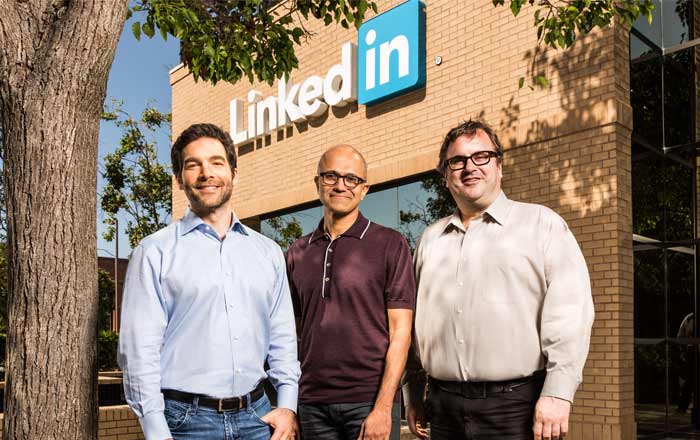 In a huge and unexpected move, Microsoft has thrown $26.2 billion LinkedIn’s way in order to purchase it completely. The plan is to integrate the professional social network with the various services from the Windows-maker’s large portfolio.

Microsoft has made it clear through a blog post that LinkedIn will keep its ‘brand, culture, and independence.’ Moreover, Jeff Weiner will carry on as the company’s CEO, but will have to report directly to Microsoft’s head honcho Satya Nadella.

LinkedIn currently boasts of more than 433 million members globally, and over a whopping 105 million unique visiting members a month, making it the world’s ‘largest and most valuable professional network.’ With this new deal, the companies are hoping to accelerate the growth of not just LinkedIn, but also Microsoft Office 365 and Dynamics.

The business-focused social network will have its features integrated with various Microsoft apps and services such as Office, Skype, Cortana and more. This fresh deal emphasizes that Redmond-based Microsoft has furthermore started to reduce its dependence on Windows and focus on offering more cloud-based features to its services.

It’s hard to believe but Microsoft has officially entered the social network fray, though its service is not in direct competition with the likes of Facebook and Twitter. This happens to be the first big deal to happen under Satya Nadella after he grabbed the reigns of the company in February 2014. This transaction has officially been approved by the Boards of Directors of both the firms.

Microsoft has furthermore said that this massive $26.2 billion deal which will see it grabbing full control of LinkedIn will be completed by the end of this year.