Do you grow your own kale or lettuce in the backyard? Would you be able to stomach it if the last thing it said to you was, “Please don’t eat me”? Microsoft Research’s Studio 99 program’s Helene Steiner and a few others are working on Project Florence, a technology which allows you to talk to your plants and have them talk back to you. What a distinctly uncomfortable notion.

Project Florence luckily hasn’t yet been developed far enough to allow your salad-in-the-making to beg for its life. Right now, it is essentially a capsule-type enclosure capable of hosting a plant and several sensors. The apparatus is connected to a computer loaded with software that lets you type anything you want to say to the plant ranging from “What a lovely day” to “I love you.”

Once you’ve keyed in what you want to convey, it is analyzed for positive or negative sentiment (we don’t know what kind of monster would want to say anything mean to their plant). The mood of the message is translated into a set of blinks. A loving sentiment might be beamed at the plant in the form of long red blinks since red light encourages it to flower, for example. 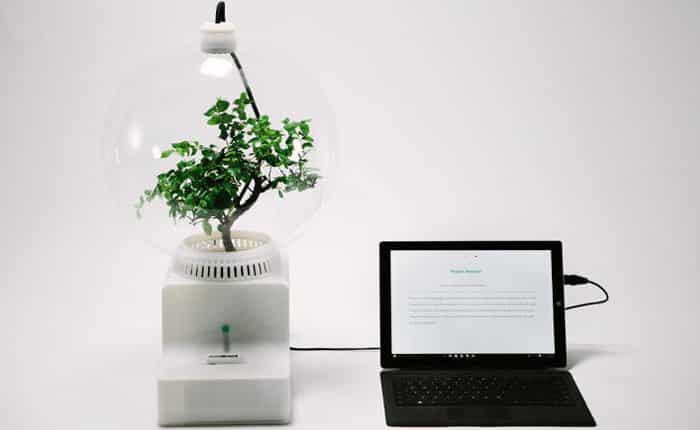 So how does Project Florence allow the plant to answer back to you? The sensors attached to its network of roots and leaves, check the wetness/dryness/chemical balance of the soil, the quality of air circulating around it and so on to get an idea of how the plant is feeling. In case the soil is too dry, the device might send the user a response which reads “I’m thirsty” or something similar.

The software tied to Project Florence gets the plant to ‘talk back’ by searching Twitter for tweets which would be able to reflect its sentiment, and sends these to the carer. Waste of resources or an innovation which could be made more useful in the future?