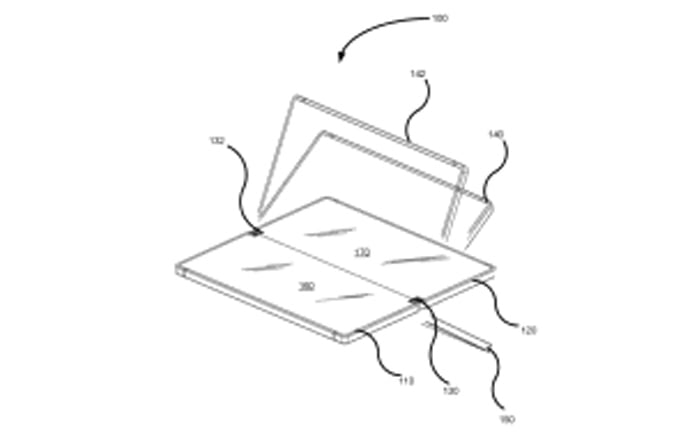 Microsoft’s mysterious foldable device has emerged online yet again in the form of a patent complete with detailed descriptions and images. This time round, there’s a bit more information on how the arrangement will work.

Popularly referred to as the Surface Phone or Andromeda, the product may well be some kind of smartphone-tablet hybrid. A hinge will allow it to switch between the 2 modes. As per the application filed with the World Intellectual Property Organization (WIPO), Microsoft is thinking of a free-stop 360-degree hinge.

Microsoft starts off by laying down the various problems hinges normally face such as their tendency to protrude out, not to mention the fact that they could fail to open and close smoothly. Its own design eliminates these drawbacks by refusing to extend beyond the surface of the dual-display device while it’s being rotated.

The hinge can even stop in any position and be tightened through a screw. Microsoft also talks about why dual-display devices are needed in the first place. It points out that there’s a demand for larger displays, to the point where screens occupy most of the front of a phone.

However, manufactures can’t make panels any bigger without making the smartphones bigger as well. That’s not ideal since most people want their device to fit in their hands or pockets. This is where the Surface Phone would fit in, since it can offer the best of both worlds.

There already is an Android phone called the ZTE Axon M with the same core concept. Microsoft will also face competition from Samsung’s own Galaxy X.