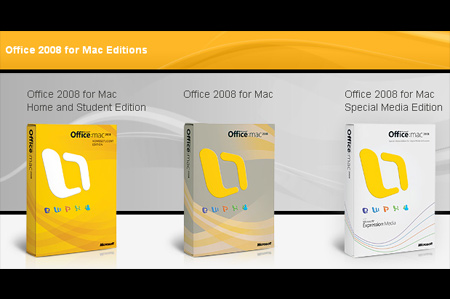 Microsoft has officially rolled out the Office 2008 for Mac at the ongoing MacWorld Conference & Expo. Till Thursday guided tours of the latest edition are being offered at the Macworld convention.

Available in three versions, a new education edition has also been included. Bundling several new features and application such as Microsoft Messenger for Mac, the new version of Office for Mac is a Universal Binary. In other words, it has the ability to operate on older PowerPC Macs as well as the newer Intel-based Macs.

Apple’s vice president of Worldwide Developer Relations Ron Okamoto stated, “Office 2008 is the latest in a long line of great Office for Mac releases that get better with every version. It has many new features that help you work faster and with more ease, and Mac users will also love how seamless it is to share Office 2008 files with PC users.”

As mentioned before, Office 2008 for Mac is available in three versions:

Office 2008 for Mac incorporates exciting new features such as support for Open XML, a revamped UI, Ledger Sheets for Excel, My Day for Entourage, Publishing Layout View for Word, and SmartArt graphics for PowerPoint. Office is available in a number of languages including, Dutch, English, French, German, Italian, Japanese, Spanish, Swedish, Danish, Finnish, and Norwegian.

The new version of the company’s office productivity suite was initially slated to have launched in 2007, but was delayed due to quality issues. In September, Microsoft announced the pricing and upgrade details. In fact, it’s practically the company’s first in nearly four years. Well better late than never!