Microsoft Office 2008 for Mac delayed thanks to Quality Issues 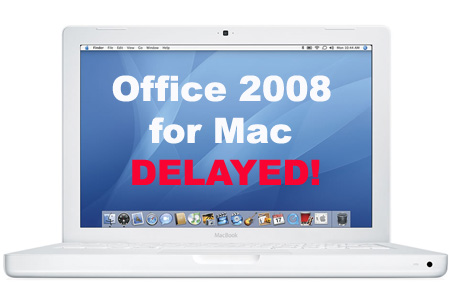 Microsoft has decided to delay the launch of its Office 2008 software for Apple’s Mac computers until mid-January 2008. The delay is to fix the remaining flaws in the software

Initially, Office 2008 was slated to be released in the second half of this year. The new suite will bundle Microsoft Word, Excel, PowerPoint and the Entourage e-mail program.

“It really is just a quality issue across the board,” maintained Craig Eisler, general manager of Microsoft’s Macintosh business unit.

According to Eisler, Apple’s decision to change over to Intel-based chips had an adverse effect on the software development process, as did Microsoft’s move to a new file format with the release of Office 2007 for Windows-based computers.

Microsoft is looking to introduce the software at the Macworld mega-conference for Apple in mid-January, and its general availability will be anytime in Q1 of 2008. Eisler has not revealed any pricing details.

So what can users look forward to in Office 2008? To begin with, the forthcoming software will share some technologies with its Windows counterpart, Office 2007, making for flawless compatibility between the different versions, claims Microsoft. Both Office releases will use the Office Open XML Formats, which will make it possible for users to easily save files and open files in either platform.

Apart from this, Office 2008 will incorporate new features such as a Publishing Layout View through which users will be able to create layout-rich documents in Word, and Ledger Sheets that allows Excel to handle common financial management tasks such as budgets, invoices, and registers without requiring users to whip up complex formulas on their own.

Eisler said that pricing for Office 2008 has not been finalized.

A delay from Microsoft is neither new nor shocking. The scenario was the same even for its latest Vista OS and the same continues again. Well, let’s keeping the age old adage ‘Better late than Never’ in mind, let’s hope it falls true here!