The upcoming Windows 10 running Microsoft Lumia 950 and 950 XL smartphones from Microsoft have had their features leaked prior to this, but there’s something more about them that we’ve chanced upon this time around. The company seems to be investing a lot of its attention into making these two upcoming handsets attractive enough to trigger a change of course for the market.

They were earlier being referred to with 940 and 940 XL brandings, but newer reports are pointing that Microsoft will be skipping that number to jump directly to Lumia 950 and 950 XL. That’s kind of similar to what it did with Windows 10, claiming that the OS is so superior that it deserves to skip the ‘9’ branding.

We had learned before that these two handsets will ship with iris scanners onboard, and a new report from Windows Central is substantiating that claim. These Microsoft smartphones will be capable of scanning your eyes in order to authenticate your identity. 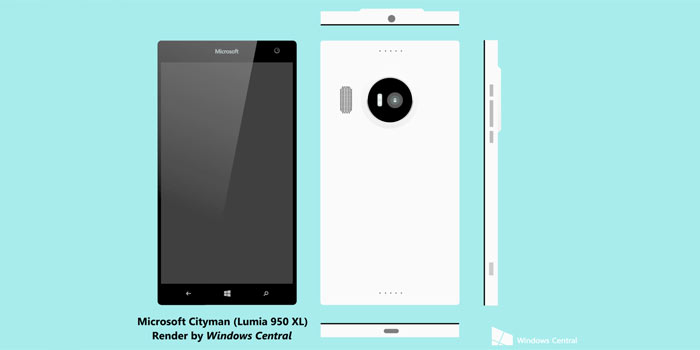 It is also being said that the Lumia 950 XL will ship with support for the company’s Surface Pen technology. That will position it as a rival to the Galaxy Note 5 from Samsung which is also slated to be unveiled soon. The report has claimed that a special smart cover is being developed for this phone, bearing a circular cutout, like the one we’ve seen on the covers of the LG G3 and the LG G4.

A look at the respective leaked specs of the Microsoft Lumia 950 and 950 XL:

Windows Central has also carved up a render (pictured above) of what it thinks the larger among the two Microsoft handsets looks like. It has mentioned that USB Type-C and wireless charging support will also form part of these devices’ offerings.

The upcoming Microsoft Lumia 950 and 950 XL are expected to be unveiled this September as the first smartphones to run the Windows 10 OS.