It has finally happened, the first smartphone without Nokia has been officially launched as the Microsoft Lumia 535 and the device is basically an ultra-cheap release that’s high on features. The Redmond company notes that the phone will retail for around €110 before taxes and subsidies.

The Microsoft Lumia 535 is more or less what was rumored. The phone comes in single and dual SIM options, both offering HSPA+ connectivity, but no 4G LTE support. As you’ve probably guessed, the handset is an upgraded version of the Lumia 530 carrying a larger display and more RAM. 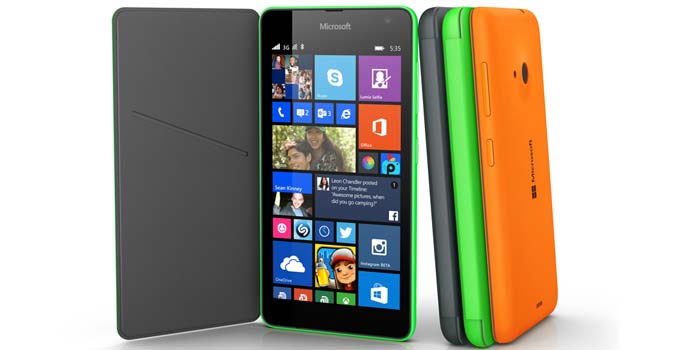 The screen used here is a 5-inch IPS LCD with qHD resolution and Microsoft has thrown in dual 5MP cameras (front and rear). On the inside, there’s a 1.2GHz quad core Snapdragon 200 SOC doing the heavy lifting along with 1GB RAM, 8GB storage and a microSD card slot which supports up to 128GB.

The Lumia 535 comes with the Lumia Denim update out of the box and it’s preloaded with Cortana, the Lumia selfie app and various other features. There’s a 1905mAh battery onboard as well, which is capable of delivering up to 13 hours of talk time or around 23 days of standby on a single charge.

Microsoft Lumia 535 specs at a glance:

The Microsoft Lumia 535 is expected to go on sale starting this month itself in China, Hong Kong and Bangladesh followed by other markets around the globe.