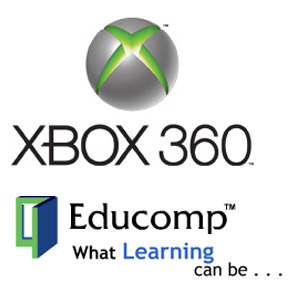 The Xbox 360 is foraying into the educational arena. Microsoft Entertainment and Devices Division, India has announced its partnership with Delhi-based Educomp, a leading technology-driven innovative education organization in India.

This initiative has been done in an effort to encourage interactive learning among children on the Xbox 360 platform. In fact, it also leverages the popularity of the Xbox 360 gaming console to facilitate academic proficiency.

This Xbox 360 Edutainment program enables multimedia curriculum-based content that has been designed to help children learn in a smart yet fun way. The subjects that will be made available are Math, Social Studies and Science for classes III-XII.

Mohit Anand, Country Manager, Entertainment and Devices Division, Microsoft India commented on the association saying, “The association with Educomp is to bring to life the fact that interactive entertainment can be leveraged for educational purposes. On the occasion of our first anniversary in India, we re-iterate our commitment to this market through the Educomp initiative. For the first time in India; the Xbox 360 will be leverage as an educational tool to facilitate learning amongst students.”

Lakshya Digital is one of the largest game developers in India, and they will be developing educational products for the Xbox 360 platform.

Dib Chaudhuri, President- Lakshya Digital said, “Lakshya Digital is proud to be part of this pioneering initiative. We are excited to work with industry leaders Educomp and Microsoft. Having worked on several next-gen game titles, we will now endeavor to optimally leverage the immense technological capabilities of the Xbox 360 to transform interactive educational content to a whole new level.”

“We are confident that the interactivity, visual appeal and graphics of credible education content based on the CBSE, ICSE curriculum, to be provided on the Xbox 360 console will enable kids to enjoy learning as never before,” added Mohit Anand.

Here is what Mr.Shantanu Prakash, Managing Director, Educomp Solutions said, “At Educomp, our effort has always been to take drudgery out of learning and make it a creative and entertaining process for children. The combination of a platform like Xbox 360 and rich 3D curriculum content that we will develop will change the way children approach learning at home.”

“It is an undeniable fact that gaming has become a passion among children today and they spend a lot of time, when out of school, playing games. Also, gaming allows them access to sophisticated graphics and rich 3D images and in stark comparison studies seem boring and single dimensional. This new initiative will allow children to make a smooth transition from entertainment to edutainment. We expect this initiative to bring education content on an interactive platform to be a hit among parents as well who will be happy to see their kids learning on the Xbox It will also allow for freedom from rote learning for a vast majority of students. Research world over has shown that students learn best with a multi-sensory approach,” Prakash added.

It certainly is great that kids will soon get fun stuff to learn on their Xbox 360s. This reminds me of Nintendo’s Brain training series whose aim is also to promote edutainment.

At the moment, the Xbox 360 edutainment content on CDs and DVDs is being developed. Soon, teachers and children will be able to get their hands on them. We’ll surely keep you updated on this one.