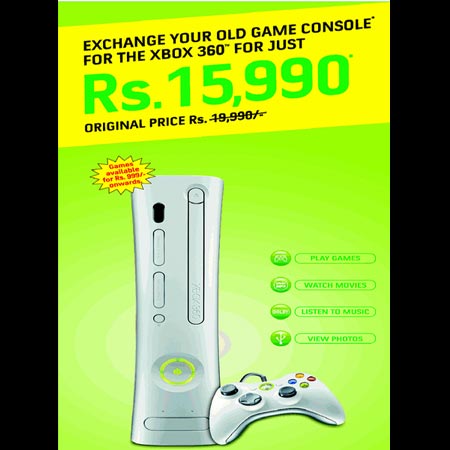 Microsoft has launched a new scheme for potential Xbox 360 buyers in India. The software giant is now offering the next-generation console for a discounted price of Rs.15,990 provided the customer exchanges his or her old gaming console for the new one.

Microsoft usually sells its Xbox 360 game consoles in India for a price of Rs.19,990. So with this offer, they are basically offering a Rs.4000 discount for exchange customers.

With the launch of this scheme, Microsoft seems to be targeting gamers who perhaps own the first generation Microsoft Xbox, or rival Sony’s PlayStation 2 game console. However, which gaming devices the company will be accepting in exchange for the discounted Xbox 360 is not mentioned.

The Xbox 360 is also being offered through a finance scheme powered by Bajaj Finance.

This newly launched exchange offer has some terms and conditions that apply, so we are wondering if they would accept Atari gaming consoles, or Nintendo GameBoys.